Another friend passed away from Covid in Mayapur, India. Bless his soul. He had taken me to the Ganges more than once for dispersing ashes of acquaintances. My poem dedicated to him.

He was a fellow perceptibly mellow

At the beck and call of Mahaprabhu

In a land of mist and morning dew

From there on, it was all over

A dedication to good deed and thought

Attention to all His Divine Grace brought

He learned, he grew, and did so glow

Teaching others what he did know

On the subject of worship and wisdom

In an atmosphere of devotional rhythm

His service was one of constant fluidity

He stood at the feet of Lion Sublime

Both shone each day at the regular time

I don’t recall him ever in a rage

That’s because he was a genuine sage

He was an anchor for half of a century

Within which his bhakti grew exponentially

A role model, our dear Pankajanghri

Powerfully at peace wherever he be 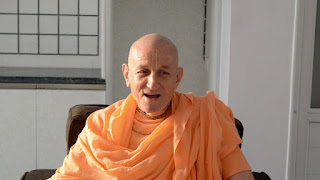