Yesterday, All My Troubles Seem So Far Away

We had a lively Zoom group, our usual Thursday gathering. Discussions were on chapter 9, verse 32 of The Gita. In Ranchor Prime’s translation of the verse it goes like this, “All those who seek my shelter, whatever their birth, gender, cast or status, attain the supreme destination.” It was a lively discussion.

Before that, I was soaking in the sun and, fortunate for me, people in the park were stopping to talk. One fellow goes back-and-forth on a jog for an hour each day. Today he stopped to offer a joke. The storyline is just too long to retell it now. The point is that he was friendly.

A second person, a woman of Russian descent, also stopped. She was curious about me as a monk; about life. She struck me as being lonely. She knows about Krishna and is interested in our group holding Russian-speaking gatherings. In such cases I give pertinent contacts to such inquisitive people.

It is so rewarding, sitting at a park bench and people just coming forward. It is, at times, almost as good as meeting people on the road; walking and exposing yourself to the elements, the world and the people. At one point I felt I had taken in too much sun. I looked at myself in the mirror before bed and confirmed – I came out with a darker hue on the face.

Incidentally I discovered that pineapple is great for a good sleep. Also, cashews, oatmeal, chamomile tea and tart cherries are apparently helpful in this regard. 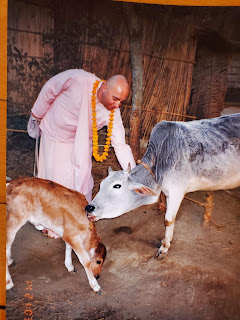