Balarama’s brother was a back passenger in a car wherein a serious accident occurred, leaving the driver in a coma and his brother with 11 broken ribs. So Balarama is a bit shaken up, and it’s been the reason for some detainment in his showing up for our drama practices.

When I heard about the accident my thought was “Here we go again with the automobile being a culprit.”

Despite the circumstances, Balarama, who is rather a good performer when it comes to acting and dancing, showed up today to play his role. He plays the part of the virtuous Vidura. He is the character who set things straight. Where there is diversion and deviation Vidura, according to the accounts given about his personality, will be there to say something regarding such matters. The Mahabharata and Srimad Bhagavatam are two texts that deliver his quality of righteousness.

There is a passion in him and one of the actions he takes up is walking as a pilgrim. He treks extensively from temple to temple and does so on pilgrim’s trails and along sacred rivers, of which there are many in India.

Vidura is a character that I used to play. In the early 90s I traveled with a troup in India, as we were hosted to venues. One such place was in Ahmedabad, where the recently departed Jasomatinandana hosted us. We were a three-man troupe and we presented the entire story of the Mahabharata. There is a scene in the production where the actor portraying King Yudhisthira observes ill omens of the dark Kali Yuga. It is depicted a soliloquy. He is speaking and addressing the audience when a batch of real live bats came into the auditorium flying all around. All the spectators were astonished wondering how the production brought out such genius props right on cue. 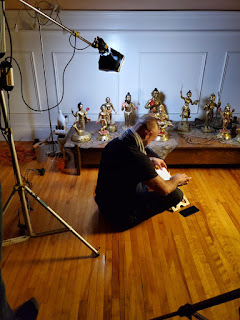 We worked at it until we got it right. Before I took to a nighttime walk, our film crew went on a marathon, from 11 AM to 9 PM, just to knock down scene 1. It was a filming session that included a 20 minute crash course by Francis on how to use the fancy equipment—lights and cameras.

Covid-19 is forcing change. In our case we are learning how to adjust from physical, in-person, performance to virtual. Goodbye stage! Hello screen! At least for now.

Our story is a slice from the epic, “Mahabharata.” A segment that is seething with greed and envy. Sound familiar? In fact, most people I know hold firm belief to the dynamic that someone’s making money out of the current lockdown. Many are questioning the particular response and approach to the current pandemic. Nevertheless, one has to carry on with caution and care in order to avoid tragedy.

In general this material world draws souls smitten by the greed factor. In the Bhagavad-Gita this world that we live in is compared to a tree that confuses the living entity. It stands in some grandeur, but also complexity. The poor soul is encouraged to become disentangled from this complicated tree.

Incidentally I would like to take a moment to honour the departure of a dear godbrother, Jasomatinandana, of Gujarat, India. He was ill for some time and then the virus came to put a clear end to his life on earth. I believe he came detatched and released himself from the clutches of the energy tree known as urdhva-mulam. My deepest regrets to losing his company. 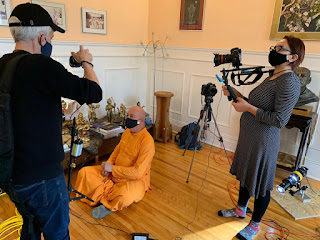 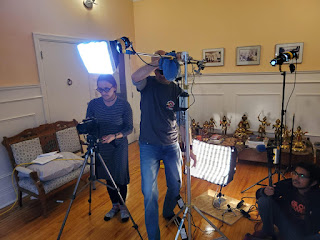 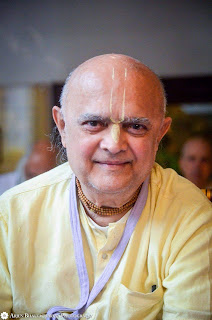 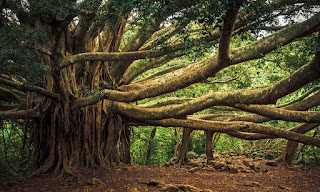 I hadn’t met Juhi’s parents before and I was honoured to participate in her pre-engagement program. Nice folks she has, from Punjab originally.

Her fiancé is Rishab, whom I’ve known since he was a kid. His parents, Rajasuya and Surabhi, of South Indian descent, are sishyas, or students of mine. At their home two families came together, and I, for an impromptu engagement. There were no engagement rings, but two pieces of ladhoo, sweet-balls made of chickpea flour, were exchanged lovingly between the two love birds.

Juhi and Rishab were high school sweethearts. They accepted my blessings as a couple, as far as I could tell. They listened to my message about being loyal once the knot is tied in marriage. I suggested to them to stay on the trail of dharma, righteousness.

“Keep Krishna in the centre,” I recommended. “Don’t let differences create a gap. Rather, honour such complementary dynamics.”

I do wish them the best and that their relationship grows just like Rajasuya and Surabhi’s backyard garden has. Mature and ripe beans, tomatoes and kale are abound in the back.

Our meal was like a shepherd’s pie minus meat. “Veggie squares,” is what Seema called it. It was other-worldly and the squash soup was to die for. The food was enough to cause a nap on our return to the ashram, but before that pleasant doze, while Rishab was behind the wheel, Juhi was curious about my entrance into monkhood. I usually appreciate the question.

No walking today but stretching the legs became a reality. 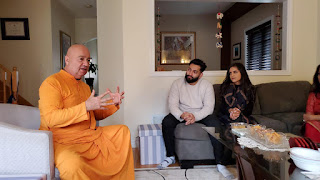 The Brickworks is a big draw, especially with today’s temperatures at 22°C, or within the region of 71°F. Being a Friday afternoon, you could feel the joy for all the browsers in their haven of ponds, multiple goldfish, trees of fall colours and even an amicable beaver working at constructing its lodge.

The plan for me and other members of our drama troupe was to have our first take with filming our drama for virtual presentation. Like in all projects, hurdles do exist. One of our key actors has had to decline for very good reasons. The responsibility rests on me for a replacement and that replacement seems to point at me.

By circumstance I met Miles who accidentally happened to show up. He’s a cyclist and you’ll see him all over town. He is also one of the actors, although he wasn’t required to show up today.

It’s going to be an adventure working with new crew members. It was our intention to shoot at least one scene of “Rolling the Dice” outdoors. We were fighting for time, with the sun disappearing soon, and the forecast cold front coming in. The weather report calls for a lightning storm and even a mild tornado. Under pressure, however, many good things can evolve.

It is Krishna who shall be perceived as the one who pushes us toward service and excellence. It is not a bad thing, necessarily. We look to the cause of all causes to shape us. 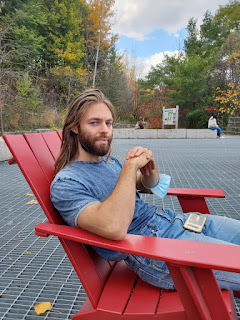 To Where the Land is Flat

Stephen drove me to Brampton, to an expansive recreation park called Sesquicentennial. There is not a more flat expense of parkland that I’ve seen, except for Saskatchewan. The place is green, clean and all who visit are in jeans, which is a slight exaggeration when it comes to attire. Brampton, in general could easily be mistaken for a suburb of New Delhi, just cleaner. The reason I say this about the place is that the whole area is rather dominated by people mostly from North India.

Stephen and I met up with Savyasacin to plan out and practice for our drama “Rolling the Dice.” In the process people in pants and sometimes turbans, would stop to see what we were up to. It’s my clothes, which are a shade dull to the bright orange pumpkins lined up at nearby “Longo’s” grocery store, which drew attention.

One gentleman, a senior, most likely from Punjab, took an interest. With little English in his realm and little Punjabi in our experience Stephen, a Jamaican Canadian, myself, Dutch Canadian and Savy, Guyanese Canadian, all looked like a sample of a Canadian landscape.

“India?” He asked, to which we tried to explain that we were working on a drama from the epic The Mahabharat.

Our practice was good. It is a contemporary approach to the gambling story. We are glad to come upon this nice flat surfaced park.

Incidentally my limp is lessening, thanks to the physiotherapy I’m doing. The stretches are doing wonders. 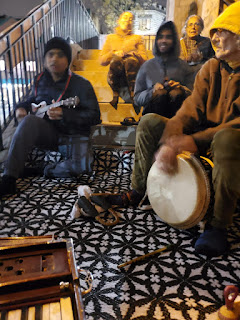