The Stretch, The Touch

I’ve been wanting to get in a bit more exercise for my upper body. Although walking for me is rather a routine, and it is great for the overall physical self, I have been feeling the need to strengthen the arms and shoulders. Lo and behold my wishes became fulfilled. The pots in the kitchen had started to pile up and there aren’t too many extra bodies around due to the Covid virus forcing restrictions on helpers coming in.

I looked at the pile of love, perhaps the way we should lovingly glance at the deities—with their fresh new attire for the day—and I said, “Yes!”

I went at that pile of steel and saw it vanished before my very eyes. Frankly it took a short while to make it a reality. The four sinks became clear and even shined somewhat. I felt a sense of accomplishment with the energy coming from the Source, Krishna.

Accomplishment is something to reach out for, like a yoga stretch. It must be a daily target. Yes, it must. When you get up in the morning plan a variety of things to do. Go for that good balance of functions, execute them, register them—at least mentally—better still to jot them down, and feel that good feeling of accomplishment. A touchdown!

I had received a message from our Ottawa community. The temple coordinator, Guru Prasad, let me know that among his congregants are two people, a couple from South India, Hari and Shymala, who are celebrating their 50th wedding anniversary on Saturday. Quite a mile stone. 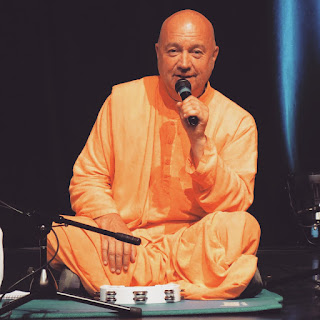 Ambika Di Maria interviewed me last week and came back with a transcription of the talk. Here is a short excerpt:

How did you become known as the “Walking Monk?”

Bhaktimarga Swami: First of all, let’s start with how I came to be a monk in the first place, and secondly a “walking monk.”

I was born and raised on a farm in Southwestern Ontario and my parents used to take me to church. Of my own volition I would go to mass before I went to school during the week, on school days. So, I had that spiritual inclination and that kind of carried on through the years.

When I entered my high school period, I started to doubt a little bit about if the spiritual practices that I was involved in were a very genuine thing. I was questioning some of the values and practices. During that time of contemplation and deliberation I met some members of the Hare Krishna movement as they definitely represented something more from the East, with roots from India. I liked the philosophy. It didn’t change my mind about the nature of the Supreme. I gained much. Let’s say, for instance, one’s identity, to understand one’s identity, that you’re not a body but you’re a spiritual being.

I spent a number of years at the centre here in Toronto, doing various services… During one period, when I needed a break, back in 1995, I decided I would go for a walk across Canada. I just thought I wanted to do that as a gift and an offering to my guru. I wanted to get out there and see the world close up and do what swamis, or monks, traditionally do, which is to travel, meet people and connect with the elements (earth, water, fire, air and ether)… 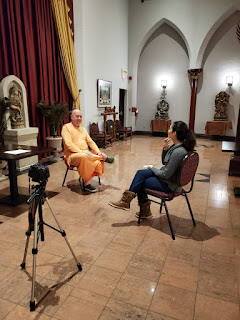 Covid in the Air, Music in the Kitchen

Rain kept me inside, so I did some pacing on the indoor balcony. Services of the nature of “devotion” also had me indoors, along with administration, eating, bonding with resident monks, etc.

One of our discussions involved acknowledging that Covid has now clearly entered into our community, putting out the alert that anything can happen to those of us in the ashram/monastery. As of a week ago we have tightened restrictions on who can enter our building. Those of us who live together do so like a family and yet the wholesome fear is finally kicking in. “Don’t get too close,” is becoming the mantra in our minds.

Our cook, Dwarkanath, is quite happy strumming on the strings of his sitar. The venue is the kitchen, an ideal space for practice. We are cooking less in general, which means less clutter and more space for instruments.

It could be that tomorrow may be our last opportunity for “Staircase Kirtan.” We will enjoy a high of 10° Celsius, which I believe is above average for this time of year.

Going back to the subject of the virus and our attitude towards its very existence; our guru, Prabhupada spoke out in a recording we listened to. He quoted the phrase para dukkha dukhi, which translates as “having concern and even feeling pain for those who are in pain.” That, in essence, is the sentiment of a spiritualist. 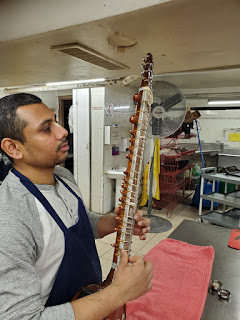