Friday, Sept. 28/07
Toronto, Ont.
Hello everyone! I’m back but not on the long road. I’m still traveling and everyday on foot offers new stories to tell, realizations and so on.
Doug, who had been given the name Daruka over the summer as a gesture of appreciation in an initiation process, had driven us along with Billie to Toronto. Daruka moved on to his home, Winnipeg. I joked “there goes the pirate and the parrot”. I referred to him as a pirate not only because of his feathered friend whose usually perched on his shoulder but because he had covered many miles (not nautical miles) over the land. It’s been an adventure. Like the life of a pirate. There’s been no looting, robbing or murder. And no battles for him, save and except for battling the mind.
Since his departure I’ve done daily walks while chanting on beads. The routes have been streets near the temple where I live-Yonge, Bloor, Davenport, Spadina Streets. I also included ravines, as the more flavored paths. Ryan is a new monk in the ashram and I have shown him the great escape areas from the city. He was surprised to discover “the green scene”, tucked secretly away from the asphalt jungle.
A week ago I traveled by car with a sister, Connie and her daughter, my niece Taralyn, to see our ailing father. At 88, hospital-bound for now he struggles to eat. No appetite and cannot walk. Diagnosing at this point doesn’t reveal the actual cause for the weakness. We endeavor to make him as comfortable as possible. I thank him again for all he has done for me. My private chanting, japa these last few days is in dedication to him.
Even if one has taken to the renounced order of life it doesn’t mean you renounce your humanism.
After the drive to Chatham and back I prepared for the next trip. Flight 964 on Air Canada takes me to a country I have never been before—Cuba.
Posted by Bhaktimarga Swami at: 10/16/2007 01:14:00 pm No comments: 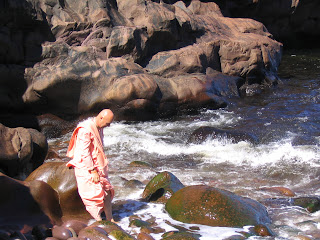