After three zoom classes for the day, I was ready for a much needed time outdoors.  I chose, as my route, Yonge Street,  a place up for change, with towering condominiums popping up along the way—perhaps it’s a way of ‘cleaning up’ some of the unwanted elements.  Unfortunately, for about two kilometres along Yonge, from Bloor to Dundas, there is a presence of an unhealthy crop of people, often not always due to their own fault—the homeless, the drug users and other unstable types.  The building of fresh new condos could change that.  It could push those less-fortunates a few blocks to the east.

I do feel for those who are pushed to the edge.  The symptoms of an unwholesome society abound, especially on this strip.  Mind you, it’s not the worst place in Canada.  And I have to snicker at the banners in the area that read that where I am is the “cultural core of the city.”  Really?!

Anyway, my observation is that the average person is uncared-for or undercared-for.  A strong amiable relationship with someone is what most people hanker for, with the ultimate relationship being with the paramatma or God-in-the-heart.  If one feels the presence of that Guardian Angel-type of friend then one feels a sense of love and security.

As I walked Yonge near College Street, I happened to chance upon a young man, from Turkey, who has been to our temple.  It was obvious at my first encounter with him that he desired a partner and didn’t have one.  I asked him in passing, “Did you find someone?”

Okay, so he has someone now, and, being Krishna Conscious, he also has Krishna.  So, great! 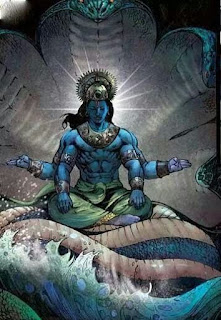 Recently another responsibility has landed on my lap.  Canada’s territory has been expanded to include Alaska, Minnesota, North and South Dakota, Montana and Wyoming; all of this for nurturing the mission.  Leaders of ISKCON, the International Society for Krishna Consciousness, have now recognized this as one zone, and, in the context of the continent (minus Mexico), this zone is called the North Zone.  This additional chunk of land, snow and people (with an altogether fairly low population) has been conferred upon me with the help of Vrinda, a very competent lady from Winnipeg, Manitoba, and a few more able men along the line.

I see it as a blessing.  Included in this lot are Yellowstone National Park, as well as more bison, bears and wolves.  I’m afraid they may not be ready for philosophical discussions, and I doubt that I’ll spend much personal time with those glorious wild creatures. Anyway, for the time being, no one is going anywhere too far or too fast with the pandemic hovering over us.

I guess one of the reasons for the expansion is that I’m already in the Great White North, and these states mentioned above are more or less virgin territories, right nearby. Very few of our American colleagues have the time to venture up to these parts. Neither do I, for that matter, but with help from our up-and-coming leaders anything is possible. 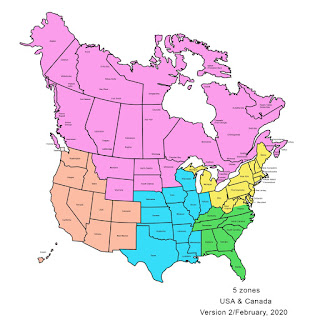 Near Me
Since I became a monk in the spring of ’73, I’ve made it a practice to have my japa beads (meditation beads) near me. This is how I was trained. My mentor at the time insisted, “Anything can happen at any time! It’s good that your beads can be within reach.” I was also cautioned that Lord Yamaraja, the God of death can appear at night, in your sleep, and with his agents, the Yamadutas, can drag you from your gross body preparing you for a torturous ride.

The kanti mala, the neck beads, and the wearing of tilak, sacred earthen substance, with markings on the upper body, are protective measures that protect you from the death agents. “They will pass over you!” explained a mentor.

And in 8.5 of the Gita we are informed: “Whatever state of being one remembers when he/she quits the body that state will be attained without fail.” This verse and a previous one provoke caution, so be prepared.

At night, I assure myself of having near me a clock, my neck beads, my tilak and my japa beads for safety. This is why the phrase: “Stay safe!” resonates with me. Another common phrase we hear during covid 19 is “Stay home!” Our guru, Prabhupada, would say, “Go Home!” implying our destination in life is in a spiritual realm. Not here!

On my return from my night walk, I saw a banner promoting the Van Gogh art exhibit in town. The catchy promo says “Gogh At A Distance.” At night, when I sleep, I am habituated to having my beads near me. No distance! 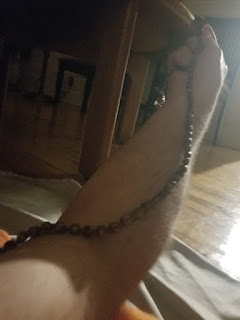 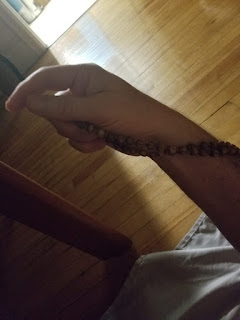 “A sleeping person imagines an alternative reality for himself and, seeing himself as having various names and forms, forgets his waking identity, which is distinct from the dream. Similarly, the senses of one whose consciousness is bewildered by illusion perceive only the names and forms of material objects. Thus such a person loses his memory and cannot know You.”
-Bhag. 10.84.24-25

These two beautiful passages from the Bhagavatam were the topic of our discussion this morning as our small group of monks now normally do on Wednesdays. It’s an interactive session for one hour. In other words everyone gives a class, each revealing some realization from the morning’s verse or verses.

Today’s session was profound, the topic about dreams and how they are an illusory state. The world in which we live also bears the same status.  There is little reality in this world, however pleasant it can sometimes be.

My evening walk was through the Annex, a family-oriented neighborhood. Parks are full now with groups of people—most likely not speaking from the platform of the Bhagavatam—but nevertheless, communicating on a more amiable level, something which is becoming a new reality. Some guys were having a serious game of baseball. In general physical realities can be considered truth, however, they are temporary truths and are, therefore, dreams played out. Dreams can be fun but are short-lived.  Hence, we can strive for that which is more grounding.

The first verse of the 15th chapter from the Bhagavad-Gita reads like this: “Bhagavan spoke, it is said that there is and imperishable banyan tree that has its roots upward and its branches down and whose leaves are the Vedic hymns. One who knows this tree is the knower of the Vedas.”

I was always intrigued with this verse and am often in my walks reminded of this tree of knowledge by reflections seen as an ordinary tree by a pond of water or an image of a double-up upright and upside-down position. While on Jarvis St. I came upon this impressive Victorian-style home with sculptures all around, one of which is somewhat reminiscent of this concept. A topsy-turvy world we live in for sure.

Very captivating is the inverted image of a wolf sculpture-piece which causes some of us passersby to stop and actually reflect a bit. Seeing this piece brought to mind something our guru, Prabhupada, used to say about this world of physicality and an anti-material world. One is a reflection of the other. In fact the material existence that we currently find ourselves in is referred to as a “perverted reflection” of the real world.

In reading the Vedic literatures we are led to believe in a permanent, settled world—not wavering, not changing but a very grounded existence—while being very subtle and full of joy.

My destination on today’s walk at the corner of Sherborn and Wellesley allowed me to observe some nice people while others, shall I say, appeared more perversely reflected.  Sorry to be somewhat judgemental. 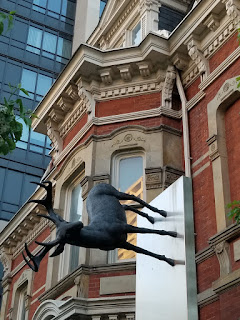 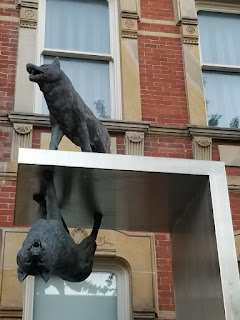 A Need for Bhajans

I met up with Ajamila at the corner of Wellesley and Sherbourn. We hadn’t seen each other since the lockdown started although the occasional meet by phone. He’s doing well and is singing bhajans on-line.

Bhajans are songs expressing devotional sentiments, in this case, to honour Krishna.

I had a thought that before long we could possibly sing and play together at this very corner by the library. There is a nice flow of pedestrian traffic, a good intersection for exposing mantras where there is a need.

There are a lot of folks wearing masks to address the easy spread of covid 19. Why not also spread “the name” or sacred sound?  Without masks, of course. We only required to keep a distance from passersby.

I’m one of those monks that have it bred in me to share what I think will be beneficial to further enlighten people. If the general populace is concerned for the body and little attention goes to the yearnings of the soul then we can consider there is something essentially amiss. With all the worry and uncertainty that lurks in the atmosphere it is a good time to put that spiritual vibration out there.

Enrichment in life is a factor to consider as we are stuck in a human frame of life. That does give one an advantage over other life forms that we have taken in the past. Enlightenment comes hard to dogs and cats, adorable as they are, and as happy as they may be under the care of their master, however we must care for the soul. 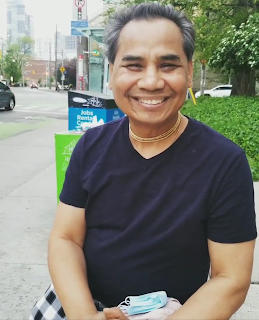