As I ventured west on Bloor Street,  a woman asked me for change just outside the Dollarama.

At Bathurst, I crossed over to head back in an easterly direction, and at Brunswick Avenue, I saw the woman again.  She had also crossed the street but she wasn’t about to ask me again. She was persistent though, with others.

“Do you have any change?“ she asked the next guy.

“So I can get something to eat…and some cigarettes.“

It looked like he was on his way to hop into the pizza place himself, just a few steps away.

“Do you want some pizza?“

She hesitated. I guess her priority was to get the sticks with fire on one end and a fool at the other.

“Okay, suit yourself.“ He went into the shop alone. I imagine a pizza was too ‘cheesy’ for her.

On my return to get my night’s attempt at sleep, I came upon a skunk. The skunk meandered around in someone’s front lawn. He was digging. He knew what he wanted and he got what he wanted—something from out of the ground. 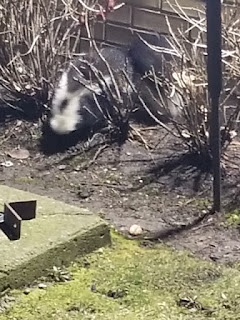 If I didn’t get to the outside for that daily walk, I would feel utter cabin fever. In a prison. So, while the sun is at optimum power, I feel I must burst out the door.

I observed interesting behaviour from fellow pedestrians. Well, some are really kind and offer a greeting of some kind, others are, IMHO (in my humble opinion), a bit over the top with caution. For instance, at one point when Corrado and I were moving on foot on the sidewalk, the oncoming pedestrian left the sidewalk to take to the middle of the street. Actually, it happened more than once, and after we passed each other they would get back on the sidewalk; and this was even at times when Corrado and I moved in single file to make room. I guess, it’s better to be safe than sorry.

Colorado left and split from our walk to tend to more devotions at the temple. I went on solo. In another instance, I was on the sidewalk proceeding ahead, when a group of three adults decided that the accommodating space I made wasn’t quite good enough for keeping to that grid. They stepped off and trekked over someone’s front yard grass.

People are keeping to that social distancing and taking it very seriously in response to the growing number of COVID-19 victims. It really was an uncomfortable sensation, but then I understand where people were coming from.

What I thought to be a real blooper was an attempt at streaming a Facebook event after my walk. I made an attempt at a podcast. To me it was not a finished delivery on words on the topic of isolation and how to go inward as a response.  To make such a broadcast more exciting, I need a moderating host. 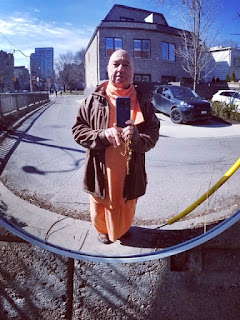 Some Anger On the Walk

I walked to the old house, 187 Gerrard Street, which was a temple at one time. Forty of us lived there in that three-storey building with a basement; the first place I lived in the city. I came here specifically to get my monastic training.  We were a vibrant bunch of Hare Krishnas, getting up at 3:30 a.m. to chant, study, do community service, eat, sleep, and teach. Memories!

On Jarvis Street, I came upon the mansion the two Massey brothers lived in—Vincent who became a Governor General, and Raymond, who became a Hollywood actor playing the role of Abe Lincoln, among many others.

The sun was strong but the air—cool.

A fight broke out between a man and woman just in front of me. Anger exploded in the air. First with him. He pulled off her flowing, silvery wig. She started beating him with a left and right, over and over. He held his arms up to guard his face. Then she kicked him between the legs, and screamed, “I hate you! I hate you!“ I guess she didn’t like him, anymore.

I walked forward, wanting to stop the violence, but she quickly stepped away. Emotions were high for both of them. He moved on. I got the impression they had both loved one another, at one time. I saw him farther along the trail and asked if everything was going to be all right.

Farther on, a cab driver shouted, “Haribol!” addressing me. At Allen Gardens, a woman stepped aside from her boyfriend to say to me, “Hare Krishna!“ This couple was cool.

Always there’s adventure when on a walk.   https://torontoobserver.ca/2019/01/10/torontos-walking-monk/ 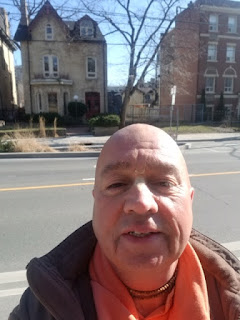