Statements Must Be Made

During the protest chanting session, which was well attended by over 500 people, I enacted what I told our organization group I would do. I committed to being a watchdog and an orchestrator of sorts. Through this last week many phone calls were made and internet promotional materials sent to inform our congregants and friends that this gathering was important. Our team was effective. CBC (Canadian Broadcasting Corporation) came and other India-based media networks.

A well-wisher in the crowd came and recommended, “Keep your mask on,” which was a challenge when you’re being interviewed. Another person came to me when I sat in the kirtan and whispered, “The fellow playing the drum behind you is bleeding on his hands.” I paid not too much attention. “It happens,” I replied and that how it is in passionate kirtans. Another concerned congregant came up and said, “Maharaja, the chanting is too happy. Shouldn’t we tone it down?” My reply was, after looking at the chanters, “They look fairly serious to me.”

The person leading the chanting was Ajamila, whose ancestors hail from Bangladesh. He has strong feelings about fundamentalism, which was the cause of his family fleeing to India, leaving behind all their belongings. And so that’s what the demonstration chanting was all about; challenging intolerance and fanaticism, which I’m afraid is a threat to Canada, the U.S. and the world over.

When our chant was completed, I promised the Bangladeshi representatives who had joined, that I would join them in some spot for an evening vigil. From there I walked back to home – the temple ashram – wondering about our beleaguered world. For now, the peaceful but loved and firm approach should send a message. Thanks to other communities who did so well, Vancouver, Winnipeg and Ottawa. 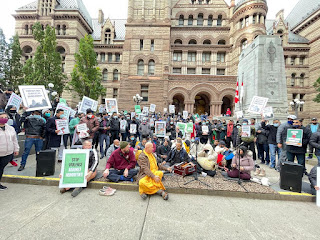 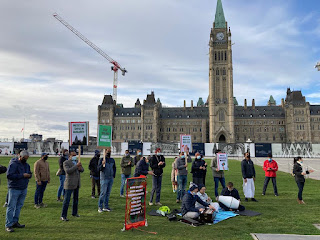 I am picking up my pace, since knee surgery on July 20, so I’m doing quite well three months later, though my distances are short. I’m happy to pull off 3 kilometres per day and could do more. I get busy, frankly, and a lot of that business lately entails helping orchestrate a major protest-chant across Canada. Vancouver, Edmonton, Calgary, Winnipeg, Toronto, Ottawa, Montreal and Halifax – 8 cities – are geared up for chanting in defiance of recent violence incurred by extremists in Bangladesh.

The approach will be a peaceful one, today, on the 23rd of October. Anyone who wishes to attend and show support is most welcome. With this endeavour, which is going on in the States as well as globally, participants are seeking justice that the perpetrators of death and violence be punished and that people of minority traditions be safe and protected.

To make a point, those who practice native customs of South East Asia follow Vedic or Hindu ways and are the original people. Their beliefs and peaceful practices need to be respected. Those of us who follow ISKCON are, in some cases, new to the ancient ways, but the world has recognized the integrity of purpose by members of ISKCON.

History tells that Hindus have experienced one of the greatest genocides in the world over the last one thousand years. The indigenous population of that part of the world has been under duress for centuries. The sad story of intolerance persists to this day. Please come out and support. 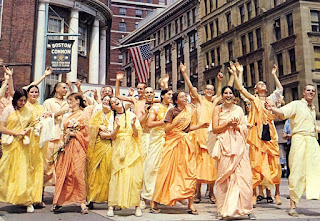 Fanaticism is a Tragedy

“Let us trust God and our better judgment to set us right hereafter. United we stand, divided we fall. Let us not split into factions which must destroy that union upon which our existence hangs,” said Patrick Henry at his last public speech in 1799.

Such also was the sentiment expressed by former Congresswoman, Tulsi Gabbard over the tragedy on Hindu/Vaishnava minorities in Bangladesh. In her words, “It broke my heart to see such hate and violence directed towards devotees of God in their temples in Bangladesh.” Her address questions the nature of the secular government boasted of in that country of 9% minorities. Furthermore, she points out a hypocritical tendency: “For these jihadists to believe it’s pleasing to God to burn and destroy temples, and the murti of such a saintly person as His Divine Grace A.C. Bhaktivedanta Swami Prabhupada, this just shows how far away from God they really are.”

Gabbard’s message went clear across the cyber world with deep concern over human conduct by fanatics. Whether Muslim extremism or Hindu, or Christian and Buddhist, the “holier than thou” is so far removed from the gentle side of saintliness.

I was walking through the park and then sat out on a bench and viewed not only her broadcast but also perused my Instagram post of the ceremony I attended in Cleveland. It was glorious, and the views of that day are phenomenal (over 130, 000).

However, the remarks by some Hindu viewers are quite surprising, expressing the same kind of fanaticism; the likes of smarta-brahmans. Many viewers miss the point of bhakti and become stuck in puny details. Woe is me! 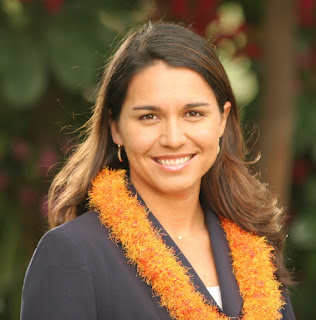