Anita Sharma was just a little girl when she and her parents and two brothers started coming around.  Her dad and mum came from the Punjab, and the family is now in their third generation here.
Successful?  Yes!  When she mentioned she has a nephew who's now a doctor, I was quite surprised how fast everything evolves with the generations.

Does she have her own family?  I asked her and she smiled and said something about "updating."  Anyway, she's married to her career as an anchor/reporter with BNN Bloomberg, on television each evening.  Yes, she's a regular TV personality.

I complimented her for having recently moved up the street from the temple (where I met her this evening).  She's quite thrilled about this new condo where she can have her dad, now eighty-two, come and have darshan (viewing) of the Krishna deity, as it is now close by.

Anita showed up just at the tail-end of our Sunday Open House.  As usual, it was a joyous occasion where people from our community, as well as newcomers, visited to chant, have darshan, indulge in a nice feast and make new friends.  There is a diverse group of people who come.  There are very few monks about.  There's myself and a handful of single men who reside in the temple's ashram.  That is the make-up of most of our ISKCON Centres in North America.  They are householder-based.

After meeting Anita, I took a much needed stroll through Forest Hill, just to wind down from the tense but happy affairs of the Open House.  Night time walking is cool! https://www.instagram.com/p/B5SVHfiAj3A/?igshid=jsb0fwgthnh6 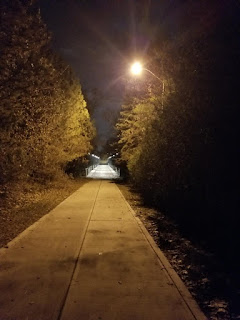 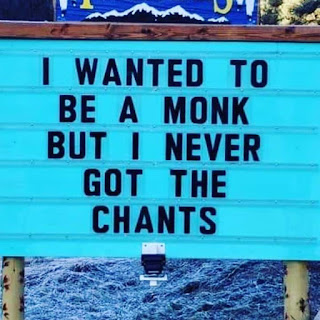 It's All New for Him

This morning was a time to look forward to, for the seven of us—Nicholas, Pariksit, David, Oksana plus her two kids, and myself.  It was the first visit for most of us to Vishal's farm.  What a treat!  Vishal was generous with kisses to the young bull (I forget his name).  He walked us to the foundation of his barn.  To follow will be a house and greenhouse.  Who knows what more?

Part two of our day's anticipation was a seven kilometre walk on the Great Trail.  The most excited among us was Pariksit with his first snow encounter in real winter.  He seemed to thrive on it.  I gave him samples of balsam, cedar and juniper.  The scent blew him away.  I explained, "It's the scent of God." https://www.instagram.com/p/B5PLDSVAon9/?igshid=2e33wn66hr2x

There was more to be experienced and observed.  A wild rabbit, squirrel, blue jay birds, caterpillars and plenty of coyote scat, were all along the trail.  This was all new for Pariksit.

The occasional cyclist passed by, each one with wide tires.  A new fad, I suppose, but suited for the trail conditions which are slushy with ice, snow and some soft muddy surfaces.

The trail is fairly straight, with a few bends here and there.  It is obviously an old railway line, some of which is exposed at 4th Line in Tottenham.  An old steam locomotive once operated through the town.  But, not much of a fascination for that scale seems to exist anymore.  A drab-looking condo building is going up in an attempt to substitute for the charm of the past.  It doesn't do it for me.  I often reflect on what our guru, Prabhupada, would say about these things.  In this case, it’s the most squarish thing you ever saw. 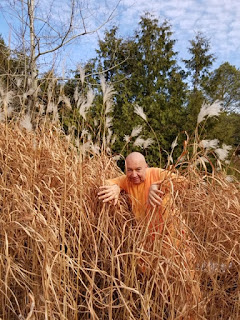 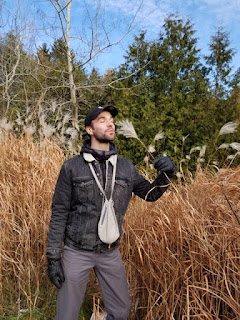 From Roxborough Street going east, I made it to Moore Park Ravine, and then came upon a new switchback at Chorley Park.  For years that has been one of my walking routes, but what's different in the newly renovated Chorley Park is that zigzag of a trail called a switchback.  Systematically, the city Parks Commission has been making improvements and completing a makeover during the last two years.  I'm noticing it and loving it.

However on my ascent, half-way up the switchback, I asked the oncoming pedestrian, a woman with her pet dog, what she thought about the new look/facility, and she replied, "I don't care for it.  I mean to say, I like the concept but they have taken down trees to do it."

She made me think, and I agree trees should not be chain-sawed down.  It could, should, be avoided.  But as she spoke, I realized no deforestation had taken place here.  There's no tree stumps to prove it.  As far as I can recall, the side of the hill, we were standing on, has been barren for decades, with only a few shrubs here and there.  In fact, young trees have been planted recently.  They will add beauty and offer protection from erosion.

I was not in the mood to disagree.  I was just happy to interact with someone, and that's why I took the initiative.  I was glad to meet someone and I believe the woman was too, even though, from her end, speaking to a monk was just a consequence.

Earlier on in the day, I met Jivan Mukta, an old acquaintance with whom I shared some years of ‘monkhood’ in the early eighties.  He has come to the conclusion that life is negative enough.  His motto is: "I don't want to hear negative." 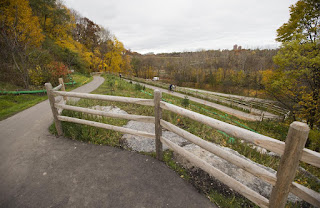 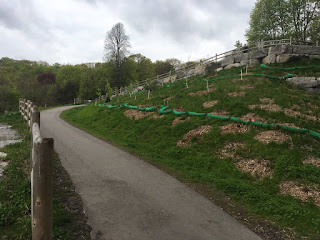