Getting to the Top

It was a bit of a climb by roadway.  Some sweat and strain took me to  the top of the 9,110 foot elevation.  Truckers know the power needed to reach that part of the passageway.  It’s a crawl for them.

I wish I had the agility of the bouncing deer I see here; the speed of the antelope, the strength of the beef cattle and the friskiness of the chipmunks around.

Chipmunks!  Despite the use of leg muscles not used as often for going up and now coming down, I prefer to remain the chipper monk.

I met Curtis, a Mormon.  He was the only person who stopped to talk.  He offered water and also The Book of Mormon to tuck under my arm.  I suggested he meet my two monk assistants two miles down, or so.  I also suggested he could receive from them one of our Krishna conscious books.

“The Mormons and the Krishnas have got a good relationship.  We have two vibrant centres in both Salt Lake City and Spanish Fork.”

He mentioned he would try to connect.

It was Jennifer of Radio Channel X94, a pop music station, who interviewed me today.  I was introduced as a Hare Krishna monk.  I was happy to hear she has a copy of the Bhagavad-gita at home.  She’s also likely to have the book of the Latter Day Saints which Curtis has, and now I do, as well.

I believe it’s good to share.  “Why the big walls between the groups?  Really!” 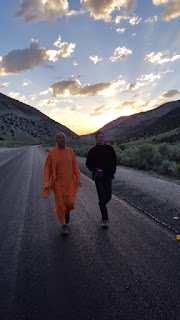 I just have to re-cap what happened last night.  I was trying to catch up on some miles.  To do so, Marshall dropped me off at the “River Road,” as some locals call it.  This is where I’d left off earlier on.

It was 9:45 p.m.  The sun was tucking itself away.  Vision was dull.  I saw a pedestrian coming toward me on this quiet road.  You don’t see someone walking at such times.  I admit I was a little fearful because of the rarity of the situation.

Suddenly the pedestrian became startled and turned to reveal its profile.  It had four legs.  It was a cow who had gotten away and was trying to re-connect with its herd.

This morning I observed more cattle, but they were, as usual, protected behind a fence and out to pasture.  I was then driven back to Vernal for a radio chat with Amy Richards from KLCY 105.5 Eagle Country Radio, on their morning show.  Johnny Cash was singing “Walk the Line” in between the two segments of our interview which, of course, was a promotion for introspective walking—pilgrimage.

The interview attracted some interest.  Roberta, an Apache woman, heard the talk while working at a drive-thru eating place.  She came out and called for me, even charged after me to offer me her fresh-made bread.  Highway Patrol officer, Kellie Oaks, pulled over.  We talked about the permanent nature of the soul, of God, time, energy.  They never change.

“The only thing that can change is our attitude and, hence, our karma or action should adjust from negative to positive.”  The officer seemed to relish the message. 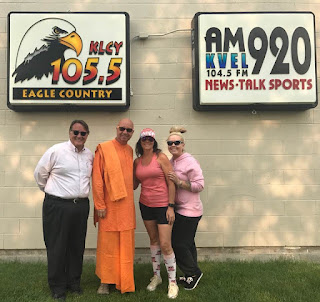 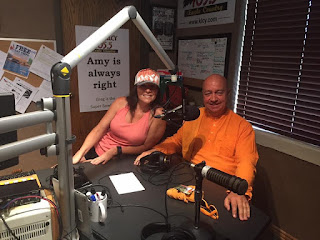 Follow-up is so important for establishing and keeping relationships.  When I met Stephen the other day in Vernal, I felt it was the right thing to do to call him once I arrived back in town.  His lifestyle sounds good.  He’s a reader.  He has no computer and for communication he has a landline telephone.

We agreed to meet at the Pizza Hut, with the boys and I going for a salad.  Steve, 75, brought his friend, Rod, with him, an accountant, and a special book he ordered, “The Nature of Devotion,” by author Srila Prabhupada, our guru.

Our conversation was light but encouraging.  At mealtime, one should never bring up topics that are too disturbing or too deep.  After our conversation, Steve mentioned he wanted to keep in touch.  He will do that by way of letter, through the mail (snail mail).

In Roosevelt, Utah, I met Brenda Fisher of  the Uintah Basin Standard, for an interview.  I mentioned to her how valuable reporting is to those of the public who have come to appreciate a broader world than their own. http://www.ubmedia.biz/community/article_9b5ad91c-578d-11e7-b737-b35374b14015.html

“Letting people know about our walk is sending a message about physical and spiritual wellness,” I said to Brenda.

Lisa invited us to her mountain home.  Rock formations in Utah are stunning and her house is in the midst of those vistas.  She cooked up a stir fry along with quinoa.  Thereafter, a talk and kirtan in Ashley Valley Park drew the new age community.  It was really sweet.

Jackie Gleason used to say, “How sweet it is!” 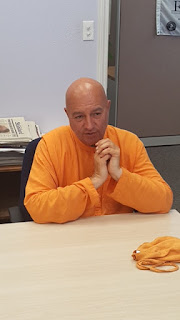