January 11 – Special For Me

Today was my mother’s birthday. She has passed away, but I can’t forget her – ever. I was her first born and she had five more little rascals after me. That was quite a load for any two parents – six of us – but we looked after each other. We were lucky because she was the typical, honourable house-and-family-keeping person. We were happy to have a parent home when we arrived from school. Then dad came back from work after 5 p.m., only to do some chores in the barn until supper time, when we all sat together to discuss the affairs of the day. It was definitely a ’50s model of living.

During my walk today, being all bundled up for the cold winter dynamic, I thought about the warmth of the structure we were protected by. It was certainly God’s grace. I believe all of us felt a type of protection from God.

I never became an altar boy in the Catholic tradition, although my brothers did. Still, I did carry on with praying on the rosary during the time of Lent, when I meditated at the stations of the Cross.

The family of four came from Welland. Dad is Abhiram, Mum is Nikunja and their two boys are Gauranga, who’s four-years-old, and Nimai, a few months. The family recently moved to Canada from Connecticut and they are playing a role in the management of our Niagara Falls branch. They had come at noon for the young one’s consuming of his first grains in what’s called kheer.

Tradition holds that it is a priest who serves the preparation of milk and rice. That was me, and while Dad held young Nimai in his arms, I spooned in three conservative mouthfuls of the good stuff. Boy, did he like it.

I was really appreciating the loving exchange between the family members. Four-year-old Gauranga is very much loving his sibling. Gauranga also participated in Vidya observance; a learning challenge. He wrote on his paper pad his name while his crawling brother made for a similar challenge as to what his vocational destiny would be. It was a simple reach for the choice of either a pile of coins or the book, Bhagavatam. The kheer-nourished toddler grabbed for the book. That brought on all the “jayas” from the family and myself. “Jaya” is a phrase that means “victory.”

This exercise or little ritual can indicate a child’s inclination. I have sat through these types of ceremonies and from time to time a baby might choose to grab for the coins, which could indicate a child’s business sense. On such occasions, we will also hear people shout, “Jaya!” 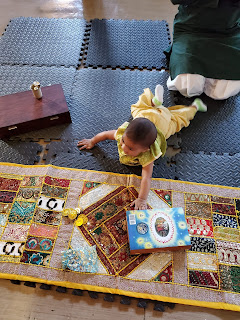 It was 2 a.m. I could not sleep well so I decided to hit the pavement, or rather the side-walk. I opened the loading door as my exit from the temple/ashram where I live and there lie a man in prostrations, in other words, head and stomach down. I don’t know how long he lay there but as soon as I swung open the door he noticed me and offered an apology saying, “I’m coming back from work and I just wanted to get the Lord’s mercy.”

“I’m sorry.” He went right back to his obeisance while I went to commence walking. I thought that perhaps there is something genuine to what he was doing. The ground he lay on was cold. It was minus seven Celsius at the time. Some people value tapasya, austerity.

It was indeed a chilly morning. The sky, being clear for the most part, accommodated whitish clouds pushed from the north. I could detect some biting currents coming from the west. Cardboard scrap was being tossed about and the north/south bus on Yonge was covered with dirt-salt film. Winter can bring on a gloomy aspect at times.

The day, however, was one of warmth and satisfaction. I consider that so having delivered five classes on bhakti, the first and last were in person and the in-between were live-streamed. For me, it is always gratifying to share wisdom and when questions flow from the listeners I know I’ve made a tiny impact. 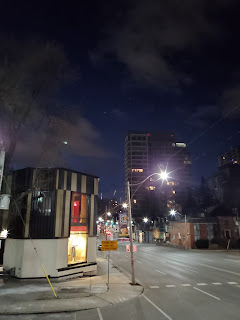 U of T, Toronto

While I strolled through some of the U of T campus, I also included meandering through swanky Yorkville, a dodgy strip of Yonge St., the platinum strip on Bloor, and a section of historic Annex. I observed the flow of pedestrians during the course. I was surprised by the turnout of shoppers. January sales is the draw. Despite covid restrictions, many folks are not deterred; despite the weather conditions being not the friendliest. Temperatures have been down, but the sun has been up offering a burst of optimism.

One really good thing about winter is the traffic is slower. Rough sounding engines so prevalent in the summer are somewhat muffled by snow during the lull in people’s passions. It’s much more peaceful. I was never for those barracudas on wheels. Fearsome they are. And I never could understand why tickets aren’t issued to those on Harley Davidsons. Why is it that they can get away roaring through the summer and no one else can? I guess they’re tough guys and gals and police are reluctant to mess with them.

My morning was calm. Our small crew of monks and two guests tuned into the beautiful words of the Bhagavatam, Canto Eleven, where a monk talks about his twenty-four gurus within nature. On top of the list is the mountain noted for its charitable disposition of offering water from snow. That pristine H20 is the most generous of gifts. Mountains do give. 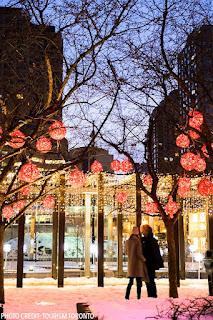 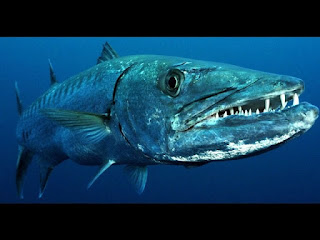