Nimai and I walked (with distance) along the edge of the bay at Lake Ontario’s Cherry Beach. We were careful to circumvent the party of younger folks dancing and gyrating to the drums. It was an anti-mask group from all I could see. Some were chanting the “freedom” mantra. They appeared happy. Police were parked nearby but out of their patrol cars, just ready in case anything would happen.

Further east we found more solitude, just the two of us, as well as ducks and a swan playing on the water’s surface. You do have some squatters tenting in the area. Too bad some of them are not particularly hygienic and are habituated to not keeping their grounds nice.

Nimai was getting irritated with the non-biting midges, sometimes referred to as lake flies. He took them as a nuisance and was frantically waving his arms in the air as if it would deter them from their dance in the air. Truly, they’re harmless in their swarms.

“They’re not mosquitoes,” I was telling him. “They don’t bite.” Fortunately, he had his mask on. These admittedly pesky guys can easily drive into one’s mouth and inevitably parish. I guess it’s a non-veg experience. Perhaps these fellows were not social distancing and that’s what was agitating him in following the rules, that type of thing. I wonder if midges can get Covid? The way he was responding to their assault on him he just as well may have considered them Covid. In our Scriptures such onslaught is called adi-bautic, distress from other living entities. 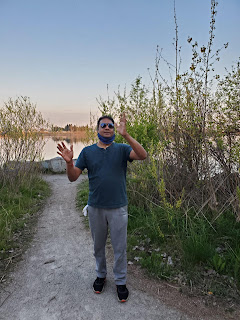