Once a month I connect with the Vancouver community, the first Monday. They are studying in sequence the Bhagavatam book and are in the section of canto ten where there is the meeting of the two great minds, Nanda and Vasudeva.

If one is not acquainted with these two it might be wise to do so. Both are great role models in the category of men, being of saintly character, but they both share a similar karma and that is to do with Krishna. The story tells of Krishna being fathered by Vasudeva mystically. Through the act of divine meditation Vasudeva impregnated his wife, the great lady, Devaki. The couple had become imprisoned by dictator, Kamsa. Shortly after the birth of the beautiful boy, Krishna, Vasudeva was able to carry the newborn baby and escape the cell to bring the child safely to the countryside in Vrindavan; to the home of Nanda during everyone’s nighttime sleep.

Without my expressing too many details, Krishna’s childhood pastimes were actually enacted in that household, making Nanda and Yasoda the foster parents, which, in a way, left Vasudeva and Devaki somewhere out of the picture. The imprisoned couple became deprived of parenting, however, as the epical history reveals, they learned detachment from this world early in their lives, which is what all persons (humans) should hope to achieve.

Back to Vancouver and we delighted in the virtual discussion with the group on the West Coast. 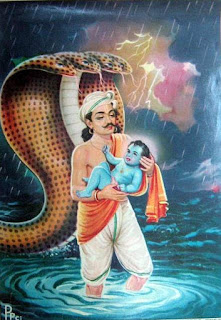