Today I walked to a different park bench, plopped myself down and began chanting with the aid of my beads when a neighbor walked by and stopped. He has seen me around. Hugh Smiley is his name.

“So, you’re chanting? I chant sometimes. I learned it from the Park Avenue bowling alley in Montreal. It became a Krishna Centre.”

“Nice to meet you, Hugh!” I said this to the nice guy who became a Baha’i teacher living in South America for seven years on that mission. Hugh never forgot the pranam mantra to our guru, “Namah om Vishnu padaya...” since he heard it first in 1971. He also sang the invocation to the text Isopanishad right there in the park, “Om purnam adah purnam idaim...” He even delivered the translation, not verbatim, but close enough.

It was great meeting you Hugh.

“If you forget my name, it’s HUG with an H and SMILE, with a Y, if you can remember that.”

“And if you forget how to say my name, ‘Bhaktimarga Swami,’ just remember The Walking Monk, because it practically means that.”

I stayed on the bench reflecting on two good days of Zoom calls. Yesterday, a class on the heroism of Rama with a school in the UK, and an interview on the topic of “Mindfulness Versus Mindlessness,” with Vaishnavi Caran in South Africa. A few moments of pensive gravity set in, thinking about our temple’s breakfast cook. Davya Radha lost her husband to cancer yesterday. She needs our prayers and love. 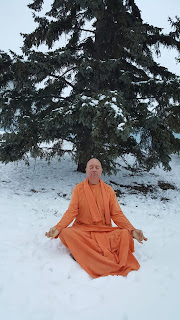