A Montreal group of Russian speaking origin occupied the late morning on a zoom call. My assignment was on the topic of “Memories of Prabhupada,” referring to my own recollections of our reverent guru. Despite my lack of preparedness for the presentation, the listeners were so attentive and appreciative. The translations done for Ukrainian and Russian folks did not hamper the presentation. One woman confessed, “You made us feel close to him.”

A second group tuned in from the Central Asia area, at 9:30 p.m., on the topic of “The Three Lives of Bharat.” Bharat was a virtuous king and he’s documented as having three births and being liberated the third time around. Interestingly enough, in one of those births he was a deer, but a very spiritual one.

In English I held a class for the Oakville group. We are approaching the final teaching of The Gita on the topic of austerities in goodness, passion and ignorance, as well as sacrifice in those modes.

A five-hour seminar on succession took up quality time today leaving two hours for that much-needed walk. Sarthak was my companion. It’s his first day at the temple. Yes, he is our new resident person. He’s a good fit. I’m happy about his stay with us – a nice person. 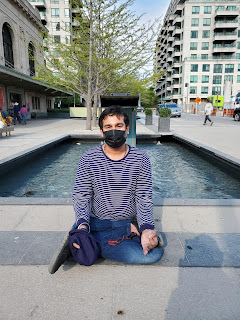