I was doing some spring cleaning and while doing so I came upon my records or reports of my second cross country walk, in 2003. Today, May 5, 2003, Bhakta Shane writes on the walking monk update:

Bhaktimarga Swami started his trek at 5 AM — a final farewell to St. John’s. He walked 40 km/25 miles from Marysvale to Upper Island Cove. The last time the walk was done he went along the TransCanada Highway. This time Bhaktimarga Swami decided to take the backroads to see the true Newfoundland and enjoy the people and scenery.

Bill, a cyclist, kept Bhaktimarga Swami company on the way, while support team lost him for about six hours out of the day. Finally spotting the saffron clad walker, the team treated Bill to a Canwalk sandwich made of bean sprouts, avocado, green peppers and cherry tomatoes that explode in your mouth…

Later in the day, as Bhaktimarga Swami took a break under a historical monument (an aircraft), the police paid him a visit after receiving a call about an odd-looking man. It became apparent through their conversation that they merely wanted to satisfy their own inquisitiveness.

Our very own videographer, Bhakta Ben, took some footage of a sun burst, stiffened bodied Bhaktimarga Swami walking along into the sunset with a refreshing breeze.

The day ended with a fabulous pasta dinner at the Hermitage Home, a bed and breakfast, owned and operated by Judy Lemoine who said, “I like B.C. mountains but I have to have my Newfoundland rocks.“ 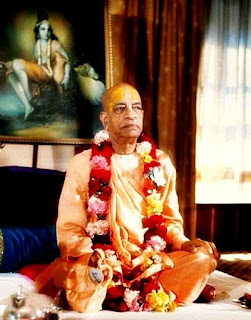