When I returned from the park, after a short walk, and came close to the driveway I heard a noise coming from the dumpster. It was a scratchy and squeal-ish kind of noise. I figured that maybe two raccoons were creating a ruckus and perhaps they were accidentally trapped inside. The dumpster was newly arrived and, I am sure, empty as renovation debris didn’t yet have a chance to make it into its walls.

I was able to peek inside. It wasn’t raccoons but three squirrels going chaotic. Upon my seeing them they just went bananas. They were scared and had no way of getting out. So, I called Vallabha, our new handyman, and he grabbed a nearby ten-foot wooden stick and leaned it in, angling it so the little guys could get some traction and escape.

Well, that did the job. One by one they made it to freedom and up the nearest tree, with its branches providing some refuge. One leapt onto the roof of Govinda’s, scurrying about.

It was a good feeling, getting them out of their predicament, something that often happens to wildlife; getting stuck.

On further reflection I believe that we are all like the squirrels. We are trapped in bodies and trying to work our way to a new freedom, a new body, however, we do meet disappointment after disappointment. Real freedom is to be relieved of this body once and for all. With blessings of bhakti we can find an escape route. 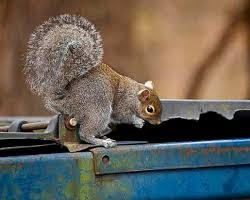