With his birthday yesterday I formatted a poem on this beloved hero.

He has the power of devotion

Weather still or in motion

And his brother Laksman

A warrior, up to serve

A person of solid nerve

And of bodily strength

He would go to any length

He came to her in small size

To take her back, no compromise

But she held to her principal

Though suggestion was irresistible

Ram was her only man to touch

Though a warrior, also a monk

His value would never ever be sunk

Only compelled to take her back to him

While Ram stood at the ocean’s rim

At first she took him as adversary

A monkey to trust is so contrary

That gesture said more than anything spoken

The celibate warrior soared back to Ram

And told of her waiting for him to come

With club in hand the primate was up to attack

Rascal Ravan being doomed for a broken back

To the one we love, everyone’s man

In part an ape, that’s Hanuman 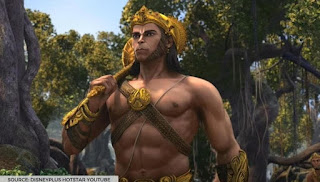