The Day of the Lion

Today is all about the lion avatar known as Narasimha. I was happily busy with delivering five classes on the subject today. This fearsome-bodied, lovable creature is a hero for many – a Divine protector.

The story of the advent of this extraordinary superhero centers around a child abuse situation. The guilty party and cult mastermind of what you could call “the evil empire” is a fellow by the name of Hiranyakasipu. Hiranya implies the man’s thirst for wealth and Kasipu refers to his lifestyle of womanly pleasure.

He begot four sons and Prahlad, one of the boys was different from the others. That was a compliment. Prahlad was under the duress of his father who just could not tolerate his son’s allegiance to God. The boy’s adherence to a power greater than his own father was just infuriating. Unacceptable! That is where the gap began. Prahlad was considered a troublemaker when in truth the real trouble maker considered everyone else outside of himself as such.

Tyrants always find themselves in a bubble. It is remarkable what they can achieve through conquest as they do. One single ego can draw an irreversible following of fools. It was just a single scratch from the super hero, Narasimha, who burst out of a pillar, that dissolved the evil empire. 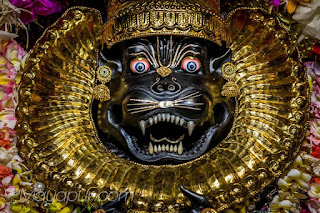