The Power of the Gita

The Bhagavad-Gita, a divine conversation between a wise person and a confused one, is more relevant today than ever. This realization became evident today when a man called asking for a pocket book edition. Well, he comes to our Govinda’s Restaurant, which is open for takeout meals. A table is set in the middle of the room with devotional books, The Gita being one. Apparently, the fellow who reached out ended up not purchasing one. The soft bound version we have was just too big for his pocket.

Can anyone sew bigger pockets on his jeans and coat?

A second call from another person, actually someone who accompanied me on the first walk 25 years ago, from North Vancouver to Hope, B.C. He expressed, after not having seen him for years, how significant The Gita was for him; how it addresses the need for a confused population in this world. It is true, feeling lost is a strong feature of today.

An English man by the name of John Newton, who wrote the popular song, “Amazing Grace” was a bigoted slave trader who turned into an abolitionist. In the lyrics he admits to having been lost and then being found. He attributes the change to the principles of the unearned and unworthy grace or kindness that comes from above.

For those who expose themselves to the wisdom of The Gita, there is something there that is said to turn one’s life around. 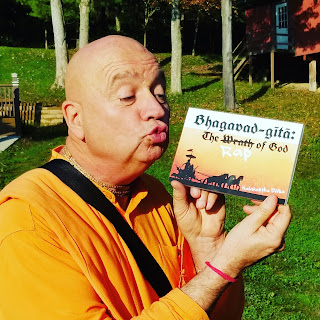