“Have you done your count of steps today?” Asked the middle-aged couple who stopped to make sure about getting an answer. They were not demanding. They just wanted to strike a conversation which I really appreciated. Who doesn’t want to make new friends?

To answer my own question on that; here is what does tick me off. For instance, I was sitting on the park bench before this, chanting on my beads, and the following scenario happened more than once. The bench I prefer to sit on is rather high in elevation. The park has its high and low elevation points. I’ll be chanting and I’ll notice someone in the distance, someone who clearly spotted me. I’ll turn my head to them hoping for a smile or nod and usually (not always) they turn the other way. Just a glimpse of the eye would be so nice. It would be a chance to connect. For me it’s a real triumph when they do reciprocate. The atmosphere then becomes light. The chances of a second time encounter could then possibly mean talking.

That’s how it usually works. First see, then gesture, then talk, then friendship. It’s so nice when it gels this way.

Now, one fella walking with his wife started photographing me while I was on the bench and talking on the phone. Usually the person asks permission, right? Well, he didn’t. In any event, after he clicked a few times, he started talking. “I’ve been to your open house on Sunday. Govinda's Restaurant too.” So there you have it. He already made contact before. The ice was broken. To the first couple I answered, “Yes. I’m counting.” 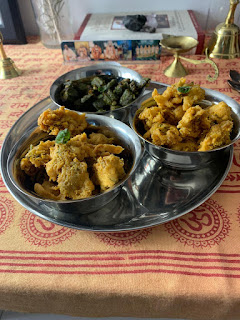