The Things I Saw and Heard Today

Before Zoom classes began I took advantage of the beckoning sun. I was sure this was not a singular thought. Sure enough the craving for sun, green-ness and crisp air was apparent. My favourite bench was available and only good things I could see. Hither and thither: walkers. A dog park replete with happy humans and canines. Men, women and children; black, white and brown. Not one person with a cigarette. Kids playing. Adults talking.

A relatively young dad was carrying a bundle of the gathered tree branches which had fallen from yesterday’s wind. His son, about five, pitched in, carrying a second but minor pile. Wood for a bonfire outside at their home? Or is it for their indoor fireplace?

A robin yanked out a fat worm, too big to swallow. He flew off. His neighbouring robin did the same pull and tug. This worm was smaller — very stubborn. It was a wrestle. The robin won. In it’s belly it went.

One last short walk and I met the only person who approached me today. I was just about to turn a corner when I stopped for a voice that shouted, “Hey!”

“Yes?” I turned around to see a tall and strongly built but shabby-dressed fellow who wanted to know if I had any empty beer bottles for recycling. “Liquor bottles?” He then asked. “How about empty wine bottles you use in your services?” I was sorry to disappoint him. I kept walking. He went in another direction. 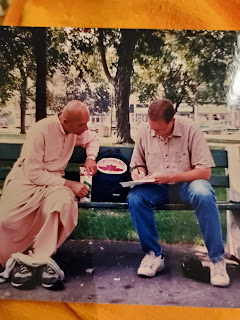