“You must be the guy my wife met the other day. Charming!” Said the middle-aged man who stopped while passing by.

“I could have been. I’m not sure,” I expressed with some surprise.

“Do you like the bench?” He asked, referring to the seat Sarthak and I sat on.

“This bench is in honour of my father. But I won’t charge you,” he said jovially.

“Thanks! That’s a great favour,” I responded as he moved on. I couldn’t resist reading the plaque on the bench. The father’s name appeared to be there. It sounded Greek (seriously). Then a caption expressed the man’s true honor with words like “honest, hard-working and not overwhelmed by fear. I could really appreciate the ancestral pride – the family spirit – with a hero or a person of ethical strength.” These values are often hard to find.

Sarthak and I also moved on, with a walk through the park’s length and back. He was noticing the fragrance of the honeysuckles. In one way this is all new to Sarthak, who arrived from India six months ago. It’s been an exploration ever since, such as how easy it can be to make a friend like the bench donor. He’s having fun along with a new job and all.

I’ll say it to Sarthak, like anyone else, “pleasure or pain” keep Krishna in the center. 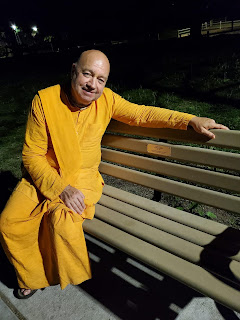