I Spooked Him/He Spooked Me

He was fully, thickly-masked when he approached me at the park bench. His name is Indrajit and after talking to him for a bit I got the impression he was at least raised in Canada, judging by his speech.

“Do you have a minute?” He asked in the beginning.

“Is this you?” He held up his phone for me to look at and I saw myself on a chair, indoors, talking to someone.

“I was just trying to look up “house warming” and this popped up. Then you walked into the park, The same person. What are the chances?” He asked.

“What do you want to call it? Coincidence? Divine intervention?”

He didn’t commit to either. He was just surprised. Our conversation ensued. It turns out he was a student, and now teacher, at Seneca College on the topic of special effects. He expressed his desire to take some of India’s epics and film them, animation or feature-film, with effects and to make it relevant as well as marketable to the general public, not just the Indian public.

I cheered him on for including everyone and, most importantly, to leave the message of virtue.

It was a great dialogue. He moved on to his friend in the park. I looked away for a second, grabbed my beads and my phone. I looked up. He was gone — vanished. Special effects? Divine efforts? 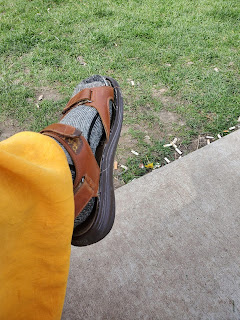