I want to thank Paramahamsa, from Guelph, who came to do some physio work on me today. I’m also grateful to Jhorom, who came as a special guest when I hosted him in the sitting quarters of our guru, Prabhupada, who spent a few days there in June of 1976.

Jhorom is loving the Bhagavad-Gita, As It Is, and since reading this exceptional text he’s been asking me questions. He is just intrigued with the conversation based on a fratricidal misunderstanding.

“Most misunderstandings, if not all, have their basis in ignorance; on the belief of the body as the self,” I explained to Jhorom, who is happily married and is a father of three kids.

In my reading this morning, from The Gita’s introduction, I would like to share: “Arjuna decided that he should not fight in the battle of Kuruksetra. This was his own decision… This decision was based on the body because he was thinking that the body was himself and that his bodily relations or expansions were his brothers, nephews, brothers-in-law, grandfathers and so on. Therefore, he wanted to satisfy his bodily demands. Bhagavad-Gita was spoken by Krishna just to change this view, and at the end Arjuna decides to fight under the direction of the Lord when he says, karisye vacanam tava ‘I shall act according to Your word.’” 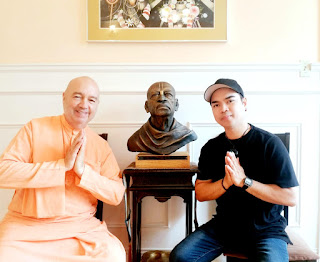