We are receiving much rain, but as long as it ceases for a time for me to stroll, then it’s okay. Stroll I did, through the park and up Yonge St. I realized one thing about myself and walking; I always get a thrill from crossing rivers via a bridge but dislike crossing streets where there’s crazy traffic, either in motion or halted. A pet peeve of mine — the wider the road, the more the lanes, the higher the risk.

Tonight, I took to a bench when a couple approached me. The fellow introduced himself as Jack but first he had a question about my vocation. “A monk?”

Jack and his partner, Alexandra, are regular Torontonians — born, raised, and bred. Jack opened up about himself, saying he was dancing with the devil in the form of booze. He’s in rehab and also into Jesus, which is all about love. “In essence,” he said, “all the groups say the same.”

“In truth, it is about love and kindness. Unfortunately, institutional walls bar this flow of fellowship,” I expressed.

Jack couldn’t agree more. I invited Jack and Alexandra to tomorrow night’s chanting in the park, in North York. “It’s just up Yonge, the longest street in the world.”

I do hope they come because there’s nothing like mantra on the green. If they do not make it, I hope to bump into them again. I also must mention that it is the birthday of Satvatanu. She and her husband, Brahma, head up the deity department. She is 62 today. 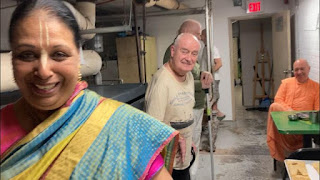