Recently a couple and their mother moved to Toronto, settling in the east and in Pickering. Anuttama and Sveta purchased a house there and are now settled in the area and ready for service. Anuttama’s specific portfolio is to function as the book distribution coordinator for our north zone, which is several northern states and also includes Canada.

Anuttama has this passion for making the books of Prabhupada available. They have changed him and made him a better person so he strongly believes in sharing the wisdom.

This afternoon, on the eve, so to speak, of Toronto’s Chariot Festival, the family came to whisk me away to a special place. I promised them I would show them the boardwalk in the beaches area; the trail taken by Prabhupada himself in 1976, along Lake Ontario. It goes for over a two kilometre stretch and is very popular for pedestrians.

We merely stepped over it but mentally, or meditatively, acknowledged its significance. We had our first prasadam picnic and took a dip in the lake for a quick refresher. It was a trite frigid for Anuttama and when we came out his natural tanned body turned red before our very eyes. Something wasn’t right. He got nauseous and dizzy, causing him to lie down in the sand. Lack of sleep, having just landed from a job assignment by plane, and little to eat over the past few days, he determined, contributed to the sudden attack. Life is fragile. Anyway, he’s doing fine now. Just seeing Anuttama’s behavior normalize was a great relief. Jagannath (Krishna) has protected him. 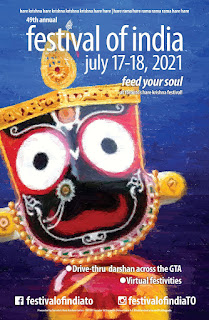