It’s a bit of bad news coming from South Africa. As I understand it, some action, based in racism, is going on; a lot of looting and more. Sad really. At our Durban temple most of the residents there have vacated and fled for safety. Our deities of Krishna have been taken away, under protection. I’m even receiving email, personally, since I know the people there, asking about refugee applications for Canada. The country is going through lots of fear.

It’s somewhat hard to comprehend when we experience a relative peace here. I have had a fairly full day of devotional activities, some of it related to the upcoming weekend festival of Ratha Yatra. After that, I asked Karuna Sindhu to drive me to Christie Pits in order to walk a self-forced three kilometres back to the ashram. I walked along Bloor in a part-meditative way; for South Africa.

At one point I took to a bench for a break. A young Sikh gentleman on his Uber run stopped his vehicle and parked it after seeing me there. He came over and asked if I was in meditation.

“Yes, of sorts, chanting the powerful mantra on my beads.”

“When did you start this?”

“Yes, every year but not now due to Covid.”

The fellow’s surname is Singh and is generally interested in the path of devotion, the path of peace. My prayers and thoughts go to his well-being and that of South Africa. 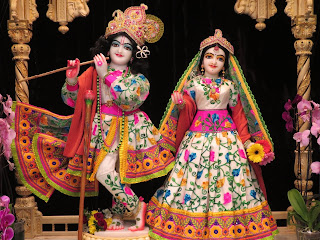