This year’s 49th annual Ratha festival, like 2020, was a modified version; all because of Covid. We are still not allowed to have major gatherings where participants can be close and, besides that, our people are loyal to mask wearing. Despite obstacles, after a year or more of keeping away from each other, we did come together on some meaningful level.

Instead of our usual chariot-pull on Yonge St. (and there are usually three chariots) we comfortably seated our three prime deities of Krishna, His brother and sister in a rented red convertible and went for a spin to three locations — an urban parking lot near the lake and two Hindu temple parking facilities. It was good to connect with the pandits and administrators of those temples. Most of all we all connected with friends of the pre-Covid times. It was like a family reunion, meeting again with congregates from different directions.

One notable moment for me was when a young high-school student asked a few questions. We went to the side when he wanted to understand what the Vedas say about atheism. It seemed he was inclined towards this particular philosophical leaning. In response, I expressed there is a level of realization in the line of brahmavad where energy of an immense power can satisfy those certain people of an impersonal approach. Three levels I spoke about. Something called bhagavan realization is the ultimate approach, where there is a recognition of superior intelligence connected to that divine personality. 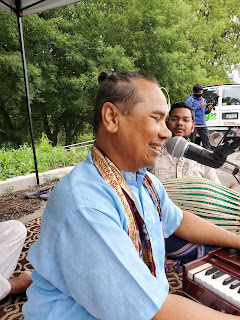