A Kind of Freedom

Karuna Sindhu is a safe driver behind the wheel and so I was his passenger, safely seated as we moved along eastward bound. It was momentous because this morning marked my first time beyond the Ontario border in approximately 16 months. We both felt a kind of freedom; enjoying what we could not for all this time. Entering into the city of Montreal was a sweet sensation and being greeted by the community of Vaishnavas I haven’t seen (many of them fairly new to bhakti) for so long was a real breath of fresh air.

After some prasad, a shower and a nap, we headed for the Bay on St. Catherine’s St. for kirtan. Residents of Montreal are not foreign to viewing and hearing a group of Krishnas chanting by the side of the street. Kirtan is kept up quite regularly and during the pandemic if kirtan was not allowed in the metro subway due to COVID, then food disbursement was. Yes, in some of the colder months the city allowed for prasadam to be distributed as it was an essential practice.

The public know us, yet tourists know us less. Nevertheless, we were liked. Speaking of “liked,” in the evening, our gathering at “Nandagram” Country Farm attracted the more committed members in addition to some newcomers. It was a campfire experience and liked by all. Once you get started with this type of thing, you just find it hard to finish. Chanting can be an addiction. 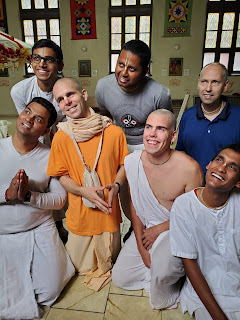