I’ve known Devananda for many years. He grew up in London, Canada, area. I know little about his Jewish descent, but he adopted to eastern ways like I did. Pursuing life in India; living like a yogi/sadhu of sorts was his calling. He’s been active in China and India and teaches shiatsu and massage therapy.

It’s great when he comes around, being about the same age we have something to share about experience in the yoga field, although my chosen approach has been more in the bhakti line. There is, however, more in common than different, despite being taught by different gurus.

We had prasad together and our lunch was something he really liked. Devananda has this genuine interest to see a better world (and again we share, in this one, the same attitude); that the forces of materialism are very strong in this part of the world.

He actually took a chance on his bike to dodge the wet oncoming storm. The coast was clear for his arrival to meet at a safe place near the temple. Well, rains came, and we had to shelter ourselves from what seemed like a monsoon. Once the rain and wind calmed, he headed for his apartment in the nick of time before a new installment of thunder and rain.

Once that cleared, I snuck over to the park. It was great. The storm chased people away, or at least deterred them from coming. I had the green all to myself for minutes – minutes that moved me closer to Krishna, in some way. I saw Him through the tranquility. 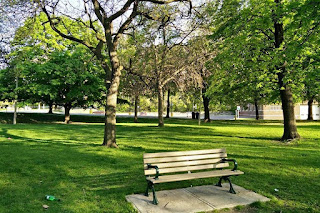