Toronto was full of fog and a challenge occurred when the lights at the airport’s runway needed cleaning (so they say). This delayed our departure somewhat and we arrived in Miami a bit later than anticipated. It was a struggle to get to my gate for the flight enroute to Port of Spain via American Airlines.

Because of tightness of time, my check-in didn’t make it. A moment of anxiety. It sure was nice to see the bhakti gang again after two years or more. I was greeted with smiles and a garland of petit marigolds.

The roadway is very familiar to me. I walked it, good God, some years ago, right from the Port of Spain Airport to the Longdenville temple. I passed by mom-and-pop shops, stalls where they sell a favourite fast food called ‘doubles’, clothing shops, and even a brothel called ‘Swami’s Bar’, and the countryside as well.

I was cheered with prasadam, blessed food from the devotees of Krishna in the form of Radha Gopinath. I saw that renovation to the temple offered a fresh new look. The temple itself became filled with devotees doing what we like–kirtan chanting. We sat and highlighted the importance of speaking positively about each other, bringing out the best in all of us. A good source for this topic is Bhagavad-gita 10.9.

Which reminds I’ll have to check out my last checked in. 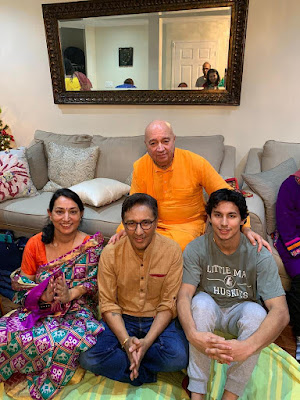 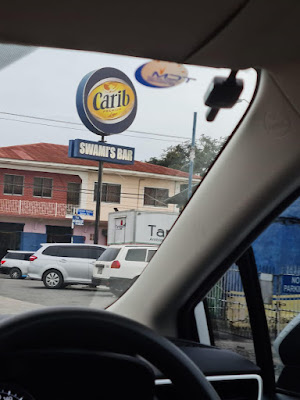