God Walks and Does Not

“The supreme Lord walks and does not walk. He is far away, but He is very near as well. He is within everything, and yet He is outside of everything.”

The above quote is referenced from mantra five of the text Sri Isopanisad. How may we analyze this mantra?

There are three aspects of God (the Absolute) — brahman, paramatma, and bhagavan. The first aspect or feature a God is a depersonalize feature of the Absolute. It would be hard to explain this feature which is defined as an all-pervasive presence of eternal light. There is no concept here of God having limbs such as arms and legs, what to speak of eyes, ears, nostrils, mouth, anus and genitals. Devoid of senses all together this feature of the Absolute merely exists as an all-encompassing power. There is nothing human-like about this first feature of all-mightiness.

The second feature of Absoluteness is more personally predominant as paramatma, situated locally in all individual hearts, at the core of all living beings and ever present in each and every atom. If you see depictions of this param (Supreme) atma (entity) there are clearly human-like features of face, body, arms, legs and so on. This image of ultimate beauty is set mystically in the core of our being. He is stationary, does not move and functions as a sensitive witness of all our actions.

The final feature of God, known as Bhagavan, demonstrates all qualities of personal divinity. It is here that we appreciate Krishna as a remote powerhouse of personality who can eat, sleep, talk, walk and love and can be observed while in his remoteness. Although bearing legs, He, Krishna, possesses not one iota of physicality so we know it. He is DIVYAM, Divine.

A few steps on the balcony 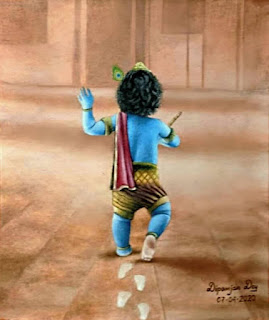