Temperamental weather today. The gods are at work. All was melting. Rains came. Wet snow. Then a blast of arctic freeze hit the land. Ice predominated and walking was unfavourable. Walking Monk out of work.

I did receive a vintage pic from my friend Krishnadasa today reminding me that I’m not just The Walking Monk. I’m also referred to as Drama Swami. The content of the photo is of Krishnadasa and myself in the 1980 drama called, “The Pandavas Retire Timely,” titled after a chapter in the book Bhagavatam.

I portrayed Vidura, the sage, who had just returned from a long walk and was revisiting the palace of king Yudisthira. Vidura’s visit was driven with purpose — to encourage his blind brother to fully retire and take to the ways of a renunciate (refer to link below for a modern-day version, “Rolling the Dice.”). Now in this story Yudisthira was left alone and was making observations of so many ill omens.

Our production of this touching story was staged on Centre Island for the Festival of India. It was outdoors. There was some synchronicity of mother nature, the gods and us actors on the mortal stage. It was uncanny. When King Yudisthira announced that rain appears at irregular times, at that moment, as if on cue, rain did fall from the sky, for only about 15 seconds and then it stopped. The audience was astounded. How could this be?

The pic has some historical significance to us apart from the nostalgic make up that we wore. I was a graying hairy brahman as Vidura and Krishnadasa was a youthful Maharaja in the production. 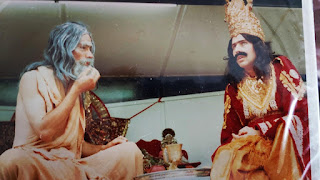