I have a number of choices as to which direction to take when I step out the door for my night walk, that is if I don’t have a specific destination, such as picking up a donation for the temple at Subuddhi’s residence. Yes, she simply calls me and I fetch it at a given time.

So, there I stood at our Roxborough door entrance. Which way to turn? Enie meenie miney mo! Well, I don’t take that mantra too seriously. What really guided me, intuitively, at least this evening, was Avenue Road south.

One criterion which determines my direction is whether I want to be in the city lights or not and maybe find a few masked people (which is what most people are these days).

From there I went south on Avenue Road, crossed the corner at Avenue and Davenport and went down to Bloor, past the Music Conservatory, Rochdale and the old iconic statue, called “The Unknown Student.” The tragedy of the Rochdale project of the 60s has much to do with drugs. The building itself became known as the largest drug distribution warehouse in North America. Many deaths.

When I first joined the Hare Krishna mission in ‘73 several apartments on one floor were occupied by Krishna families. The rent was cheap and so was the drug culture. Krishna devotees play no part in that. Eventually the families left. I remember a group of us Krishnas coming from that floor after a brief chant and all the druggies as well as some students in the front of the building parted and gave way, out of reverence, I guess. 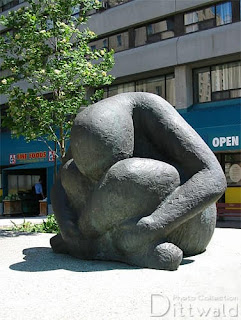