It was nice to hear that the Indonesian President, Joko Widodo, accepts Lord Krishna as his ultimate superhero. That’s pretty cool, considering the nation is an Islamic-dominated community. At one time Indonesia was largely Hindu and Buddhist. In fact, Hinduism, or what was more traditionally known as the culture of Sanatan Dharma, was the original practice and belief system of India. They were the indigenous people and, being of a more passive nature, the kings of that geographical era never went out to conquer other lands.

Traditions from outside current day India, however, did come to make conquest, especially Islam. Millions of indigenous people of India were killed while many survivors were forced into conversion at the point of the sword or through the taxing of only non-Muslim people.

During the 20th century the land mass of India became very diminished from a Hindu/Vedic-based culture to majority Islam. For instance, on the west side, Pakistan broke away to become a Muslim nation. On the east side, East Bengal deserted India to also become a country were, even today, indigenous Hindu people are discriminated against. It is called Bangladesh. And in the North, Kashmir and surrounding areas, Hindu families have been very discouraged through socio-political maneuvers, to the point of leaving their motherland.

In the US and Canada there is a history of European or Christian takeover of indigenous people. That type of conquest also happened in India. There is a need for a change in consciousness in the direction of love, acceptance and mutual, congenial co-existence.

I invite you to view our new film, Rolling the Dice: https://www.youtube.com/watch?v=IF3legHdMgI 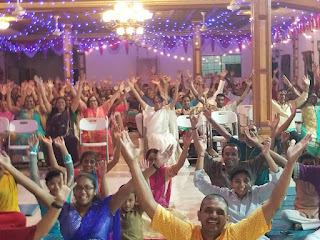