A 1500-year-old image of Krishna is being restored in the Cleveland Museum of Art. PBS has released the recent story about the deity of Krishna from Cambodia that made its way to Cleveland in the ‘70s when work began to put broken pieces together. Basically, His head and torso are in pretty good shape. In fact, it is this handsome image that portrays His lifting of the Govardhana Hill. Twenty-first century technology is being applied and giving Krishna a look and stance that He deserves. Credit goes to the museum faculty that appear to be putting heart and soul into the project. After five decades, when the piece (or pieces) first arrived, finally museum lovers are going to love this gorgeous statue.

In 2016, when I walked through Cleveland, I did come upon one of its fine museums (but not the Rock and Roll Hall of Fame). My support person, Gopal Keller, who was taking an online arts course, arranged for us to go through the museum. It really is a world class collection. The local newspaper came by for an interview of my U.S.A. walk. A rep took a photo of myself trekking by in front of the building. That photo was named the “top pic” for the week and also made it to the Chicago Tribune. The public likes the visage of a monk, even in a modern-day setting, by a classy edifice. Of course, you’re not going to find a monk always in a midst of trees. We get around.

It is interesting that in the life of Krishna, He found Himself in both rural and urban settings, although He never carried the profile of a mendicant. That was to come in His incarnation as Chaitanya. 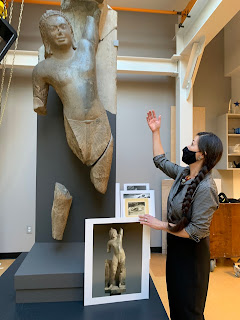