I want to congratulate the six new initiates who received their diksha and their new names. They are a smiling group. Optimists.

My nighttime walk was interesting. I often go to Queen’s Park, and bypass the ROM (Royal Ontario Museum). Near the museum, a silver balloon appeared out of nowhere. It seemed to greet me, but being light and frivolous in the wind, it wasn’t about to stay with me. It was bouncy, buoyant and beautiful. Let’s call it “Jumping Jack Flash” (like the song from the Stones). I thought of it as a lost soul checking out the scene. In its wanderlust, it daringly bounced, or attempted to cross Avenue Road’s six lanes.

It only got so far and then retreated back to me after getting to about the fifth lane. I was expecting one of the motorists to pop it with its tires, make it explode, but that didn’t happen. Jack Flash and Walking Monk were meant to meet, but briefly. I am prone to walk while this soul is bent on bouncing, floating, and, eventually, deflating.

He has his journey. I have mine. “Nice meeting you!” 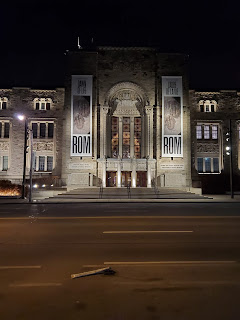