Of Subduers I am Time

This was our final day for the MANtra Retreat, which was very fulfilling. It was also engaging. It required my presence. While on top of that I invested time in desperately adding the final touches to “The Embassy,” our film for this year. Because of this preoccupation, I had to ignore calls (put on DO NOT DISTURB) and make it a priority. I disappointed some people and had to cancel the Gita Zoom Class with our Mississauga group, as well as the message I was going to deliver to the Muskoka group. My deep apologies. I had to give full attention to the Retreat this weekend.

I noted some powerful messages that came from presenters. Let’s start off with a quote from the Gita. “Of subduers I am time.” That was quoted in connection to “men and grieving.”

Other statements that resonated:

“Don’t act on how you feel, but act on dharma.”

“Sadhana starts at 9 am,” (referring to how you apply what you’ve got from chanting and hearing before that).

Mahatma, one of the presenters, quoted Bhaktivinode saying that the three components of bhakti are compassion, humility, and forgiveness.

Prabhupada was quoted saying that if one is envious of another, then serve them in some capacity. It was also pointed out in a session that resentment is an addiction. It also is an identity. Overall, MANtra 2021 was a great success. God content. Good character. 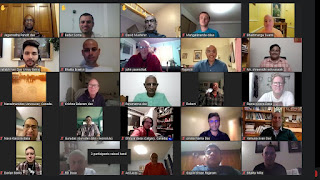