“I was raised in Lebanon” said the 25-year oldish woman when she saw me and only after she told of her religious affiliation with Islam. “There was a lot of anger and hardness, so I got very discouraged.” She really did want to talk after seeing my apparel, so she went on.

“Then I went to a Christian church. People were quiet, friendly. They were singing and doing it so sweetly. I felt very welcome.”

I told her of my involvement in a tradition which has roots from India. “Since 1973, I’ve been a monk and, in our culture, we concentrate on meditation to do with mantras. It’s a true peaceful approach to life.” I gave her my card with the maha-mantra on it. It reads, “Please try the following MANTRA and SHINE: Hare Krishna Hare Krishna Krishna Krishna Hare Hare/Hare Rama Hare Rama Rama Rama Hare Hare. TRANSLATION: O Awesome Creator, allow me to be of blissful service to You and the world.”

The young woman glanced at it and wanted to continue to speak, but in a somewhat hurried way. “Maybe I should look into this?”

“Yes, we have a temple and a restaurant.”

“I think meeting you was meant to be. Maybe this is my next phase?”

“I believe you,” I said. “I wish you the best. Don’t hesitate to contact me.”

“I will,” she remarked with anticipation all over her face. 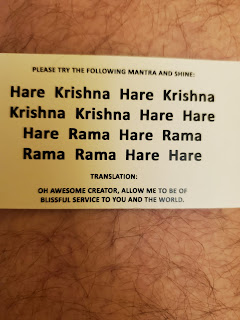