Change by the Public

In the early days of the Hare Krishna movement, with us chanting on the street, we were regarded either as a sensation or in agitation. It all depended on an individual’s judgment of things. Naturally our attire and our activity of making fairly exotic music appeared out-of-place. For some we came across as a nuisance because we were clearly not ‘in sync’ with the business pulse. For others, they found our counter-cultural display to be ‘cool’ and definitely radical—challenging the status quo. A quiet whisper in the wind was snaking its way in an urban navigation around the imposing buildings saying, “The chant and beat is a shake-up and break-up. It’s good for you.”

Now, years later, our street chanting isn’t as frequent, yet progressive countries have embraced old/new ideas, allowing the Hare Krishnas to fit in to the slot of acceptance. My observation is that the person who stirred up the movement, who has since departed decades ago—Prabhupada—was personally absent from the public view. He was ‘underground’ in the sense of being quietly in the background, despite his mission being meant for being shared boisterously like a brhat-mrdunga, a big drum. In any event we had made inroads.

I was at a pond yesterday and a jovial Polynesian man stopped riding his bike and began singing the great Krishna mantra. “I’ve been to your temple. A few times. I like it.”

Tonight, finishing my walk on my second-last block, I heard a positive “Hare Krishna! Dealing with the heat?” It’s been more than acceptance for us. For many, we are liked. What a change it has been over the years. 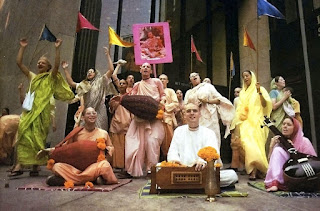