We had merely walked a few metres down-hill, and then came to this lush section of a Carolina forest, on the Jon White Trail. This was the location of a sweet marriage between Cameron and Katie. What a spot! Wild raspberries everywhere. Congratulations!

Cameron had decided that I marry him as I am a registered solemniser of weddings in the province. I consented to his wishes. He has been a Gita student of mine for some time. Usually on Thursday afternoons we have a weekly one hour call and comb through the mysteries of the Gita, chapter by chapter, however, today was different. He chose today to tie the knot.

Ananda, from Scarborough, drove Krishna Chandra and me to this heavenly sphere, at the conservation spot. He also conducted the ceremony, basically. The three of us chanted mantras, to invoke a good future for the couple, and executed a mini fire-ceremony. There was an exchange of garlands and rings. We were succinct in all that had to be said. I quoted from chapter 6 of the Gita, about yoga, which, by the way, refers to union.

We then had to rush to Toronto, after some chatting, to make it in time for a Zoom call with devotees in Florida. On the call were bhakti yogis who engaged themselves in hearing from chapter 2 of the Gita, information, not overload, however, under applied by most of us. One epiphany that came out of the discussion was, “from tolerance, truth is revealed and from truth, tolerance is born.” 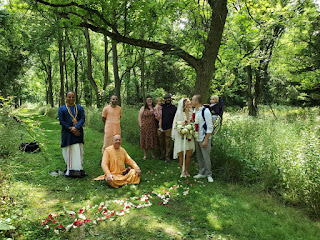