Tonight I met Jake who very much misses eating at Govinda’s.

“It’s not that having a take-out wasn’t nice. I just like eating the meal inside and sitting back and taking in the peaceful atmosphere.“

Jake was on his bicycle but stopped to talk. Once we finished, he was inspired to walk his bike. I didn’t ask him to.

The only other person who somewhat gravitated toward me was a very loud bipolar chap. He saw me in the lotus position when the breezes were so inviting. Well, the breeze blew him my way. He was open and friendly enough; spoke a mile a minute.

“I’m Muslim. Hey, you’re sitting in the direction of Mecca. Did you know that? The three Abrahamic religions are all part of the same family…. Do you mind praying for me? Please.”

He gave me his name and just went on talking.

I’m still having the toughest time getting over the departure of Bhakti Caru Swami. It came so suddenly. Although he passed away in Florida, arrangements are being made to fly his body back to India for the last rites where he will be placed in a samadhi in Mayapura, ISKCON’s headquarters. During those thoughts I shifted myself more in the direction of the east, toward Mayapura. Maybe I’ll get the blessings of both Mecca and Mayapura. https://iskconnews.org/beloved-iskcon-guru-and-gbc-member-bhakti-charu-swami-passes-away,7419/

Indeed the breezes were so favourable, but my mind was disturbed at the loss of a true brother. 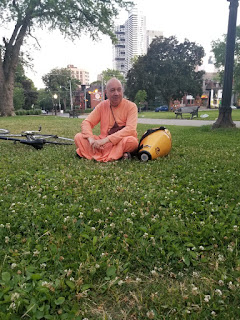