I never met Michael before but he seemed to know us. Just to make sure he had the right group in mind, he asked, “Hare Krishna?”

Then Michael, a man about fifty years old, proceeded to speak about a deity of Krishna which was moving His eyes—a deity owned by a Hindu friend of his. He inquired about our philosophy: “Is this pantheism?” simply because I had mentioned about seeing divinity in all things.

“Yes, brahman is everywhere, however, there exists a Supreme Brahman, God, from whom all things emanate,” I explained.

We could have spoken for hours but my legs are not necessarily ready for just standing still for too long, and besides that, it was getting late. It certainly makes my day (or night) when I see inquisitiveness in someone. My contentment comes from seeing someone again around the same location for a second discussion. So after terminating my talk with Michael, I anticipated another repeat meeting. That would be nice.

Michael was one to not honour social-distancing according to the rules, so I had to step back a couple of feet. Speaking of being cautious about Covid-19, we have a deity of Krishna in the form of a lion who protects His devotees from adversity. His name is Narasingha, an actual half-man, half-lion incarnation.

When I return to my residence, at the temple, after these walks, I feel the presence of this protective deity who has been set up near our morning speaker’s chair. He is a brass deity and He projects a power of safety. 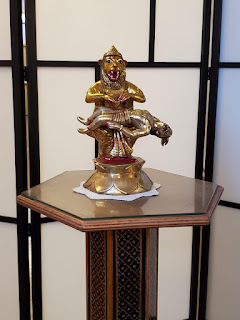