Sanjit and I took, as our route, the Ancient Trail currently known as Davenport. It is a winding roadway—the edge of an escarpment where Huron-Wendat natives trekked and met explorer Etienne Brûlée. It’s hard to imagine the world of the past, when all was green, raw and untouched.

Our destination was Sherbourne and Wellesley, by the library, which is at present closed. There we met Michaela from Croatia. As a film/camera person by profession she has offered to work with me on the next drama “Rolling the Dice,” based on the epic “Mahabharata.”  During our glance over the script and exchanging of ideas for upcoming camera work, a phone call came in from India. It was Pariksit, who acts as an assistant director for productions I’ve done recently. This call rather fell in place at the right time because “the play is the thing.”

One pedestrian, who could be, at my guess, based on their attire, an Ethiopian woman, took incredible interest in our mini pow-wow at this outdoor destination. I guess she really was curious about my robes, however, I had to defer her to Sanjit to explain, as best he could, what Krishna consciousness is. Well, he tried and, having lived in Africa, he began to converse in her language. They hit it off right away! I could sense she was charmed.

Some minutes later a young shirtless man (could have been the same lady’s son) approached me in a most challenging tone.

“What can you tell me about spirituality?” he demanded while trying to gain a foothold as he staggered.

I’m not sure what he was on but I took the disarming approach saying, “I’m really just a beginner,” which is true. His aggressive attitude softened. 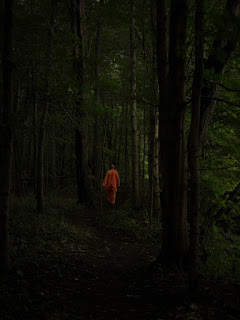