Before I took my walk today I was sitting, and across from me was our senior-most monk who resides in our ashram. His name is Dakshin, a native of London, Ontario, and he became committed to bhakti, devotion, back in 1974 when he joined in Vancouver.

He’s a jolly and dutiful type of person and in the temple portion of our building he does two poojas (rituals) per day and also functions as our security for three hours. He can look mean with his stick and bears a grave persona, however, deep down he’s like a teddy bear.

Once I started my evening walk,av I paced a few steps along Avenue Road, and then I bumped into Vrindavan, a guy in his twenties who had grasped to his side his cherished skateboard. His mother is Canadian and his father is a Texan. I’ve known him for a while. Nice fellow.

“Any injuries?” I asked, referring to his skateboarding. He then proceeded to speak about some of those challenges and in doing so he decided he would detour his steps just to chat with me. It was a good chat!

At Christie Pits I met with Vishal, at the centre of the park, and we talked about varnashram—about the ancient social structure that Sri Krishna established for humankind.  Krishna identifies four different types of people, based on their nature and behavioural tendencies. I explained to Vishal about the visionaries and spiritual guides (brahmins), the protectors (kshatriyas), the producers (vaishyas), and the supporters (shudras). While we were discussing at a park bench we met Maryem Tollar, a well-known singer. 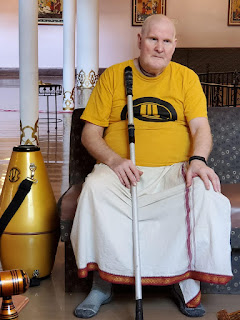