The Night of the Skunk

A generous rain came down upon us tonight. It canceled out our daily ten minute kirtan at the steps of our temple ashram. It subsided at 10:30 p.m. and, after a snooze, I took to a faithful trek when all was more calm.

During nights like these—silent, with barely a breeze—the skunks come out. The first one I spotted was full-grown and scrounging around for its meal. A second was just a young one and perhaps naïve. I ended up rather close to that one. I became motionless but equipped myself with the camera on my phone. You may show either bravado or stupidity when encountering these fellows. It was necessary for me to freeze as the skunk was curious to the point of sniffing my shoes. Instinctively he backed off and, luckily for me, did not raise his tail for the infamous spray technique.

Skunks are omnivores. They go after grubs, insects, worms, moles, roots, leaves, grass and fungi. It’s a big menu they have. Fortunately ‘monk’s toes’ aren’t on that list. Their dinner time is usually quite late. This guy was munching at midnight, just as I was completing my walk.

I had a chat with an officer, one of those young, clean-cut kind of rarities. Also I met a civilian, Michael, who gave a “Hare Krishna” salutation. He was more inquisitive than the skunk. With so many questions I began to feel it was tough to stand anymore. I concluded the conversation with tact. 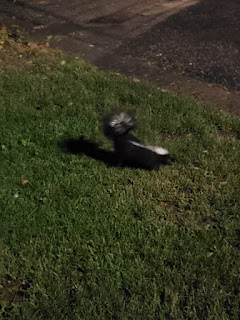 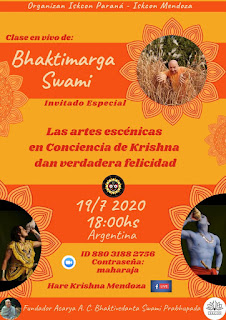