The other day, when I walked with Nick eastbound on Bloor, the street lights allowed for seeing all that happens on the sidewalk. By observation the night hours do often bring out the craziest elements.

One fellow, on something, decided to execute a version of push-ups. No problem, however, his positioning was north-south and occupied most of the sidewalk. Oblivious to the pedestrians’ thoroughfare, we were forced to walk around Mr. Fitness-on-a-whim.

Not five minutes later, another fellow, on something else, lay with his back on the sidewalk. Was he out like a light? Apparently not. As he saw me coming, he rose at the waist and raised his arms.. An Ali Baba greeting or something? I’ve received that type of protocol before by people in jest.

Moving farther along, with Nick and a young Oriental woman in modern attire caught up to us and silently walked abreast of us for several blocks. Perhaps it was her usual pace. At the juncture on University Avenue, Nick and I decided to just plop ourselves on the stairs of the “Church of the Redeemer,” but our new walking companion halted herself along with us and begin uttering remarks about how “everything is so cool.” She just hung out with us for a few brief minutes with no introduction. What was she on? We parted and noted the eve of instability.

Tonight, I sat on a park bench at the same above-mentioned time. However, this time with more sane circumstances. We were thinking about our dear Godbrother, Bhakti Caru Swami, who is deeply struggling with the Covid 19 virus.  I offered a prayer: “Dear Krishna, if You so desire, please allow Bhakti Caru Swami to remain with us in service to You.” 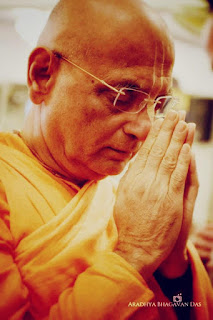