A last little touch of the boreal forest marked the end of my stay in Thunder Bay. The Beaver Meadows Trail takes one through a sweet boreal forest, a forest that occupies so much of Canada, holding a treasure of a huge collection of freshwater. Check out maps of this extraordinary spread of trees, ancient rocks and lakes. People speak of rainforests, such as the Amazon but, as I understand, the boreal bush impacts the globe in a similar, environmental way.

If you are a walker you have to love nature. Even if one begins routine outdoor walks with some apprehension, the atmosphere grows on you, eventually.

After landing at the Toronto airport I had a chance for a short touchdown in our neighborhood park, Ramsden Park. It’s considerably warmer in the southern part of the province. It was 3°C in Thunder Bay in the morning. Upon landing, after a two hour flight, we were greeted by a warm 17°C. Quite a difference.

I was struck by seeing the lineups at the tennis courts. Basketball courts were also occupied. Before long the hockey rink will be filled up with ice. I can hear the skates hissing along already. It’s actually a kind of grind sound created by the blades of the skates biting into the ice. I can also hear the hockey puck slamming against the rink’s wall.

We do have a fall season yet to relish. It is colours, smells and no mosquitoes that I look forward to. There’ll be two months of such glory.

While the park is busy with sports abound, it would be nice to see a tad more of spiritual practices taking place. It is somewhat rare. 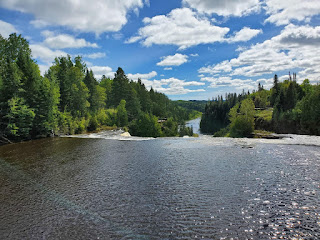