Nature was conjuring up a storm of water. Ominous clouds were ever present in the sky and lightning made its periodic flash, accompanied by the rumble of thunder. Hey, that’s the name of this place!

It was at this time, early afternoon, that I began my mere two kilometre walk (my physiotherapist suggested I reduce daily treks and work on stretches to counteract stiffness). In any event, I decided to go at strides at a critical hour of nature. I don’t mind the reminder to be humble. The elements can do that perfectly.

It was considered that the second day of the Festival of India would be rained-out. Just as I turned the corner at May Street, for what is called “The Colosseum”, H2O, in mass, came down. The moisture hit me but I was just one minute shy of being fully-drenched.

Like a miracle, the rain stopped, eventually. At 4 pm, the scheduled time for this show’s beginning, we were on target. The stage had been cleared of water. Though soggy, the entertainers did their thing and motorist, with an average of two or three passengers per vehicle, began to punctuate the parking lot, armed with purchased bags of colour.

Regular colour throws happened between stage items. It was a redeeming display.

I met a local guy, middle-aged, who was part of the infantry in the Bosnian War. He was curious and told of his spiritual experiences when he was severely bedridden with cancer some time ago. This was a personal revelation. It was nice to see him standing there watching the show with his five-year-old daughter. We had a conversation that lasted to practically the end of the show, when Ananda and I wrapped up on stage with drum, movement and mantra. 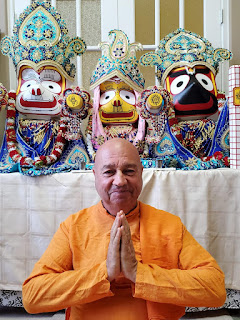